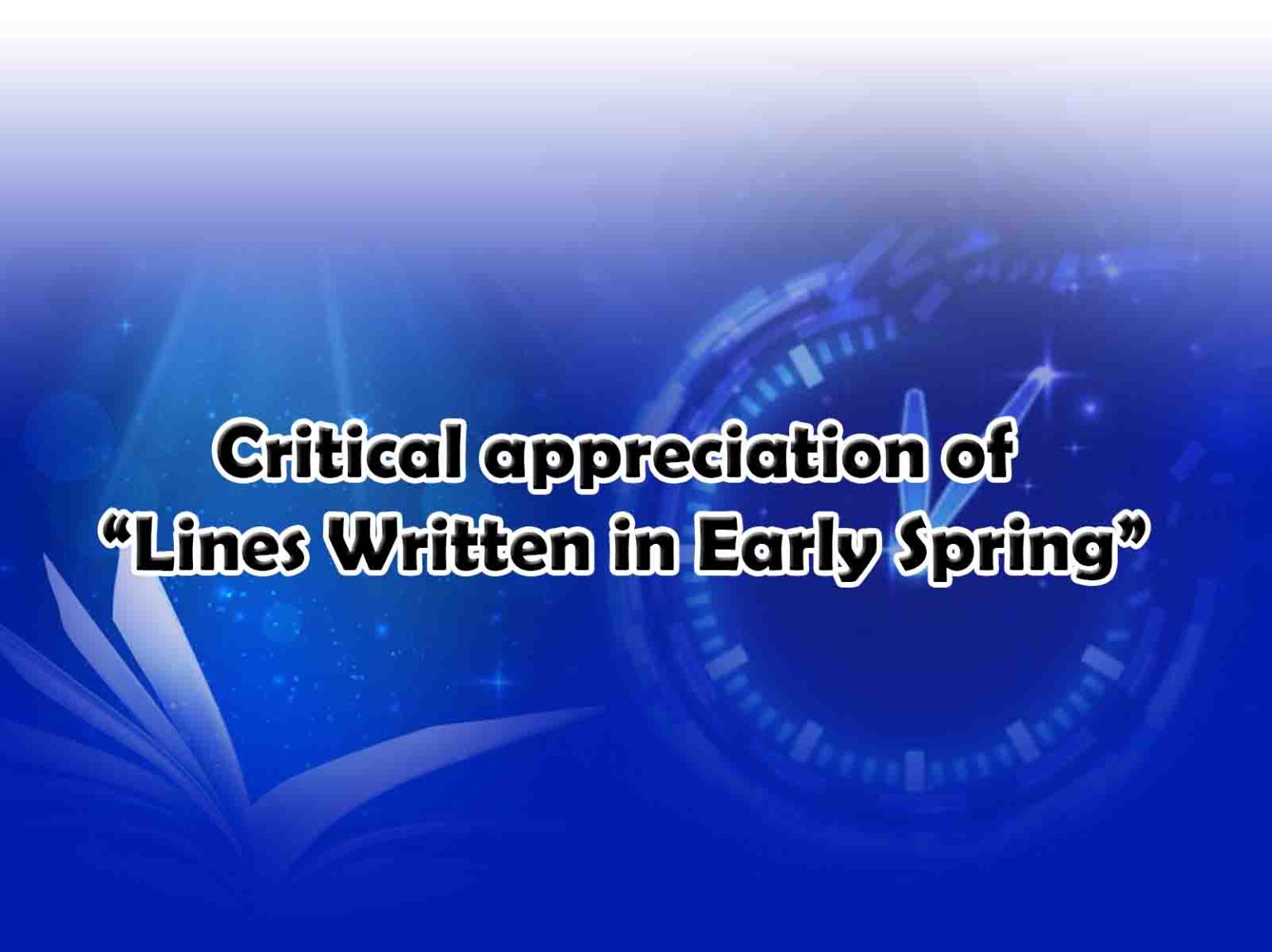 William Wordsworth, an English Romantic poet, wrote “Lines Written in Early Spring” as a reflection on the harmony of nature and how humanity has failed to replicate that harmony. The 1798 poem, which appeared in Wordsworth and Coleridge’s Lyrical Ballads, describes a speaker lounging in a pleasant grove on a spring morning. He is moved to regret “what man has made of man,” or, more specifically, the cruelty, selfishness, and conflict that characterize humanity, by the joy he finds in the natural world and his conviction that his own soul is somehow tied closely to that delight. Although humans are a part of nature, the poem makes the point that they don’t always act as such.

Wordsworth composed Lines  Written in the early spring while taking a walk close to Alford. Wordsworth was an enthusiastic walker and frequently wrote his poetry while on the move or while he observed natural scenes. He was a supporter of the French Revolution and worried about the state of society and what people were doing to one another.

Read more about: P.B Shelley as a Romantic Poet

William Wordsworth’s poem “Lines Written in Early Spring” is a landscape that focuses primarily on the natural world. The unidentified narrator observes the social changes taking place all around him while relaxing under a tree in the wilderness. It is a contrast between the state of nature and that of humanity. The poet is contemplating nature’s beauty and continuous existence while he sits there, but he also briefly considers man’s suffering and the suffering that people have inflicted upon one another.

The poem “Lines Written in Early Spring” is composed of six quatrains, which are groups of four lines. These quatrains have an easy-to-remember ABAB rhyme pattern with different end sounds from stanza to stanza. There are few instances where the rhymes are more like half rhymes than whole rhymes: For instance, in the opening verse, the words “notes” and “thoughts”

Iambic tetrameter is used by Wordsworth in the first three lines of each stanza before switching to iambic trimeter in the fourth line of each stanza. Each stanza’s first three lines all include four sets of two beats (apart from a few instances where the stresses are ambiguous or transition stresses). Both of these are under stress, yet only the first is. The final stanza only has three sets of two beats because it loses one metrical foot.

This poem’s main focus is nature in all senses of the word. The poem includes visually appealing depictions of the natural world and human character. Additionally, it emphasises how everything on Earth—tangible and intangible—is inextricably linked. Man cannot perceive or interact with nature. We do, however, see and touch nature in all that we eat, destroy, make, and love thanks to the connection theme. He contrasts the implied failure of people to live up to such a paradigm with the natural world of birds and flowers, which he portrays as one of quiet harmony and joy.

Spirituality also prominent theme of Lines written in early Spring The speaker of this poem, who is most likely the poet, keeps an eye on the surrounding environment the entire time. He talks about the effect that nature imagery has on his mood. His mood was “pleasant.” However, this happy state of mind causes him to reflect on more profound ideas, such as the nature of humanity and the state of the human soul and spirit. In the face of Nature, which includes all of us, he laments what man has done to man.

Poets, novelists, and other writers utilise it to evoke certain images in the reader’s head. To enhance the reader’s experience through their senses, imagery uses figurative and metaphorical language.

From the very first line to the very last, everything is obvious. To precisely and passionately capture the environment he is viewing, the poet makes use of a number of human senses.

In this stanza, he gives twigs that are just beginning to grow the human trait of spreading out to take in the air. Personification deals with giving human characteristics to non-human being

He is giving a flower the capability to “breathe” in pleasure from the environment.

Another example of personification in this poem is when Wordsworth writes:

“The budding twigs spread out their fan, To catch the breezy air”

Enjambment is a poetic device where the meaning continues from one line of poetry to the next without the use of a period at the end. End stops are used on lines without enjambment.

The transition between lines one and two of the second stanza exhibits enjambment.

To her fair works did Nature link
The human soul that through me ran;
And much it grieved my heart to think
What man has made of man.

As well as lines three and four of the fourth stanza:

The birds around me hopped and played,
Their thoughts I cannot measure:—
But the least motion which they made
It seemed a thrill of pleasure.

Trojan Saga and Role of Gods in Trojan War

To the Lighthouse in Relationship with Art and Life