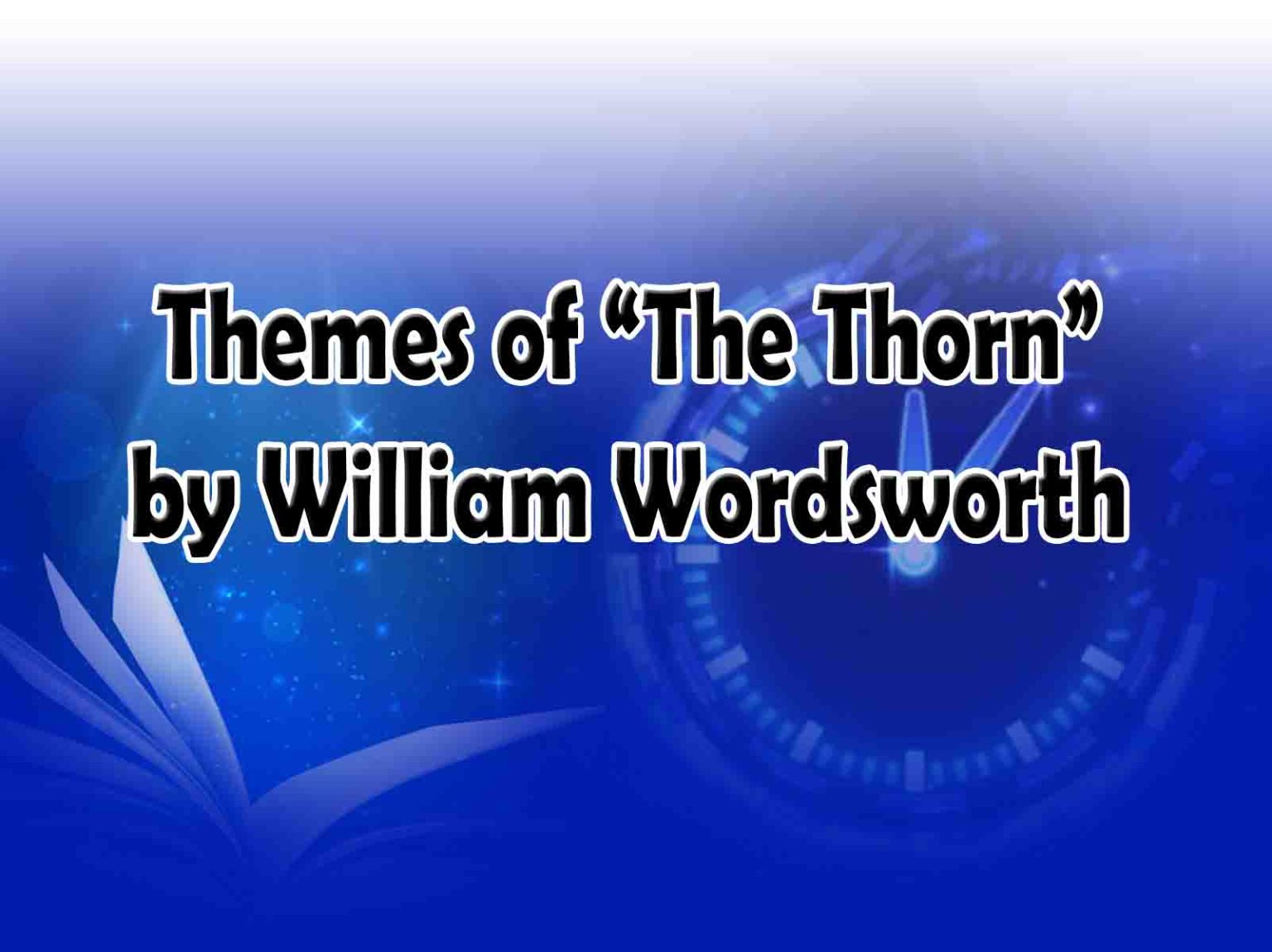 Wordsworth depicted nature in a way that the outside natural world reflects the inner, subconscious, and emotional aspects of the human soul. The first five stanzas of the poem The Thorn are entirely devoted to detailed descriptions of the thorn, moss, pond, and mountain, which serves as an example of this Romantic theme. The thorn is described as being similar in height to a two-year-old child after being revealed to be so ancient and grey that the narrator finds it difficult to fathom it being younger.

The narrator then describes it as being a horrible thing. The character of Martha Ray is introduced with the same adjective used to describe the thorn, “wretched woman,” emphasising the relevance of this adjective choice. These descriptors are then mirrored in her. These connections allow us to see Martha Ray as a personification of the thorn. Her mystique, impenetrable “woe,” and confusing, confused past are comparable to the thorn’s “mass of knotted joints” and “melancholy crop.”

The poem’s unreliable narrator reflects Wordsworth’s well-known contempt for the Gothic genre. The narrator is enthralled with the folklore surrounding Martha Ray and her origins in the area. Wordsworth’s lyrical language was revolutionary because he frequently included and empathetically illustrated persons who were poor and destitute.

In The Thorn, the narrator allows his imagination to cloud and overly stimulate his more educated observation and empathy because, as Wordsworth says in the poem’s note, he is a sufficiently ordinary person vulnerable to superstition. The narrator’s superstition colours his perception of Martha Ray and how he treats her in stanzas 16 and 17, where he finds her cowering and exposed to her tormentor’s weather. Instead of comforting the woman, he treats her like a curiosity. The initial descriptions of Martha by the narrator border on the supernatural.

Near the poem’s conclusion, the narrator muses that the rumours of foeticide in the area are probably untrue, but his lack of compassion during their encounter and their sensational discussion of the sick woman strongly imply unreliability and Wordsworth’s criticism of what he perceived to be the emotionally empty thrill of the Gothic subgenre.

Pathetic fallacy (The literary term “pathetic fallacy” means the practice of attributing human behaviour and feeling to elements of nature that are not themselves people. The stormy weather, “mist and rain,” which frequently occurs in poetic descriptions (for example, when clouds seem glum, leaves dance, or rocks seem indifferent), serve as crystal-clear mirrors reflecting Martha Ray’s mystery, chaotic life, and inner suffering. The words that describe the “whirlwind’s on the hill” or “the small breezes” that move the pond are immediately followed by Martha’s cry of “Oh misery ! Oh, how awful.

This raises the possibility that the character’s suffering is influencing the weather, or vice versa, since each tremendous wind gust and rain comes with a wave of emotion from the character. The dangerous weather also contributes to the poem’s Gothic-influenced, profoundly melancholy tone.

The poem’s central theme is death. It is crossed via the barren Winter landscape, where only lichen, thorns, and moss are present. The likelihood for miscarriage, stillbirth, or murder also gives death a horrific focus. The poem uses Martha Ray’s descriptions and the lonesome beauty of the thorn to depict death. The local legends are confirmed by the narrator to be mere superstitions, acknowledging death and Martha Ray as a gloomy truth. It is something that the villagers observe from a distance, similar to how we as humans are unable to really understand death until we are face to face with it.

The Romantic Movement in Literature

Chief Characteristics of the Age of Shakespeare

Thematic Analysis of The Madman by Kahlil Gibran