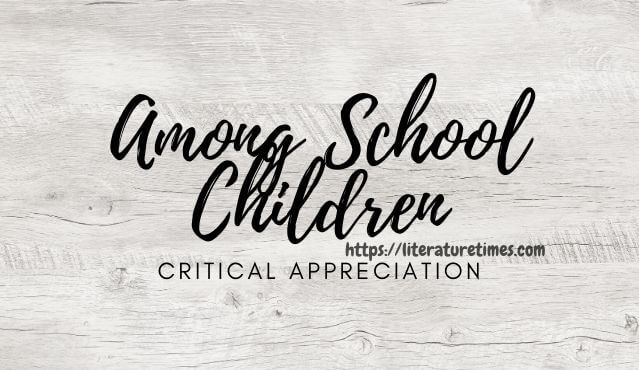 “Among School Children” is a poem by William Butler Yeats. The poem was inspired by poet’s visit to convent school and possesses the themes of aging, unity of existence and body and soul relationship. The setting of the poem is convent school. The tone of poem is serious and thoughtful. The poem is written in first person narrative. It is rhyming poem with eight stanzas, each having 8 lines with rhyme scheme of abababcc.

Among School Children is about a visit made by Yeats to convent school in Waterford, 1926. Yeats visits as a public figure but poem is record of his private thoughts. His mind begins to wander and Yeats dreams of his muse and love, Maude Gonne.

Yeats again turns back to the present moment and wonder whether Maude was like any of the young girl in the school. Then, he pictures Maude later in life, aging as he himself is. It is as if her late beauty was fashioned by Renaissance Artist. Now Yeats moves toward self analysis from mother’s perspective. He said, he borrowed the “honey of generation”, image from an essay, “The Cave of Nymphs” about a mythical idea that honey destroys women’s memories of pre-natal lives.

Amid in the same issue, now from perspective of three ancient Greek Philosophers; Plato, Aristotle and Pythagoras. Plato was an idealist, Aristotle a materialist and Pythagoras believed in the music of spheres. Each had his own approach to meaning of life.

At the end of the poem, chestnut tree is given as an example of beauty. The tree as whole labor to produce its blossoms, each part is necessary, reliant on others for expression. The body responds to music, the dance a creative expression of body and soul. The speakers concluding enigmatically – it is the artist inside that prevails learning from nature and its own institution in harmony with rhythm of discipline and form.

Themes in “Among School Children”:

Poem posits the theme of aging when poet meditates on the present image of Maude Gonne as an old woman.

“Her present image floats into the mind”

The contrast between the past image of Maude Gonne and her present image brings the problem of aging the fore.

“Hollow of cheek as though it drank the wind”

“And took a mess of shadows for its meat?”

These lines are particularly prominent because they portray this image of women from the 15th century who drink wind and eat shadows as if they were meat – like someone out of fairytale.

“Both nuns and mothers worship images”

Mother’s solution center on her expression of love and affection whereas nun’s include worshiping idols of immortals gods, but both solutions are not in-fact solutions. Neither passion nor piety nor affection (mother) can prevent the growing age.

Theme of Unity of Existence:

The poet revolves around his own philosophy of existence. The poet less seems concerned with how to prevent the growing age than how to achieve unity of existence.

After observing insufficient labor of philosophy, mother and nun be put forward unity between body and soul.

Are you the leaf, the blossom or the bole?”

Theme of contrast between knowledge and experience:

At the beginning of the poem, we also get this theme. He Talks about the way of modern learning, though he didn’t explain elaborately. He only wants to know whether the lessons they are being taught is really relevant to life. They learn “to cipher and to sing, to study reading-books and history,” but Yeats realizes about the true lessons of life that do not come from the classroom rather from experience or age.

Theme of transformation from innocence to maturity:

This theme, with references from the legend of Leda whose innocence was violated by Zeus. Yeats relates the rape of Leda by Zeus with these innocent children’s turning of a;

Leda’s body “bent/ above a sinking fire” is symbolic of her diminishing youthful spirit; Leda loses the purity of her youth through one “trivial event.” Yeats knows that later in life, these children, with the same Leda-like innocence, will have to be stripped of their purity. This change parallels Leda’s, and the children’s, transition from innocence to knowledge.

Poetic Devices in “Among School Children”:

Repetition of first letter is alliteration, the starting of two or more words in a line with same consonant.

“Blossom or the bole…”

Two or more words in a line having similar vowel sounds.

When one line runs into another without punctuation.

“I dream of Ledaean body, bent

Above sinking fire, a tale that she

told of a harsh reproof, or trivial event.”

The form is known as Ottava Rima, originated in Italy, made up of cross rhyming sestet and couplet, with rhyme scheme abababcc.

Among School Children” was inspired by poet’s visit to convent school, he looks at the children and meditates. This meditation develops into philosophy which advocate unity between past and present, between man and his memories and between body and soul.

“In the Penal Colony”: Themes

John Donne as a Metaphysical Poet