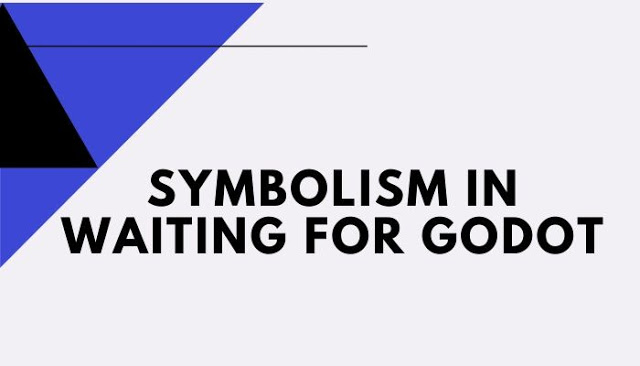 Beckett’s Waiting for Godot is full of symbolism including the names of characters like Viladimir and Estragon, Lucky and Pozzo and even the hidden character; Godot.

Symbolism, if simply defined, is the use of some words, things or events without their apparent meaning rather referring something else.

I have highlighted some symbols throughout the play and will be explored deeply in-short: Tree, Lucky’s Baggage, Pozzo’s Rope, Night Fall, Hat, Names, The Boot, The Bone.

The tree where the two characters, Viladimir and Estragon meet, is completely bare of leaves at the beginning which represents the organic element of setting. This tree portrays the world as barren or meaningless, lack of purpose. However, the apparent growth of leaves on tree in the start of Act 2 still do nothing for the meaning of life. It only adds to the uncertainty about the place and passage of time. Despite Viladimir’s description of tree in the play as; “covered with leaves,” the stage direction specifies only “four or five” leaves.

For some critics, the cross on which Christ was crucified is sometimes called a tree. Viladimir and Estragon do discuss the tree and hanging themselves in Act 1 when the two thieves crucified along with Christ. This means that hanging from the tree draws parallel between them and thieves.

From Beckett’s view, he said that he was puzzled by people trying to take away “a broader, loftier meaning” from the play, making it unlikely that he intended any broader religious symbolism.

Lucky never puts down the items he carries, except when Pozzo orders him to do something. He again picks it up without any reason. This action shows the human tendency of enslavement and burdens which are unnecessary. The baggage contains mostly items for Pozzo’s comfort but, in Act 2 it is revealed that the bag which is never opened in Act 1, contains sand. This is another example of character “deadened” by a habit.

The relationship between Pozzo and Lucky is shown as capital and labor, master and slave, exploiter and exploited, between old testament God and new testament Christ.

Lucky is a slave for his master Pozzo. Lcuky is tied with rope, holding both master and slave together. This is the symbol of distance between the God and his slave. However, when the rope is short the distance between them is smaller. When Estragon and Viladimir try to hang themselves with cord and it breaks, and they remind themselves to bring rope tomorrow. This rope has same purpose as for Pozzo and Lucky.

While Estragon and Viladimir are waiting for Godot, they also wait for the nightfall. This nightfall shows that darkness is like a death and falling of night is like to reprieve from daily suffering as death is death to reprieve from life.

Hat represents thinking, as the long monologue of Lucky in Act 1 and stops when his hat is knocked off. Estragon and Viladimir also exchange their hats with Lucky’s hat back and forth. This scene is the representation of instability of individual identities and exchanging represents the exchange of identities.

The most important example of hidden meanings in the play is Godot, which is similar to God. Godot symbolizes salvation that religion promises but never comes true. Estragon means “tarragon” in French, while Pozzo is Italian for water. Lucky’s name suggests the unluckiness of the sufferings. However, nihilist viewpoint is that, these names hold no meaning at all.

7. What do the boots symbolize in Waiting for Godot?

Boot symbolizes daily life struggling and Estragon is the most affected by boots. He takes off and putting again them on. This shows daily struggles in life which cannot be changed.

Bone is the symbol of poverty, the characters do not have enough food for themselves and they beg for their survival. This shows the relationship between Feudalism or Capitalism who has dominated over the poor.

Waiting for Godot is a must-read play for everyone. It has so many interpretations, written in 1953, has a remarkable piece for Theater of Absurd and tragicomedy.