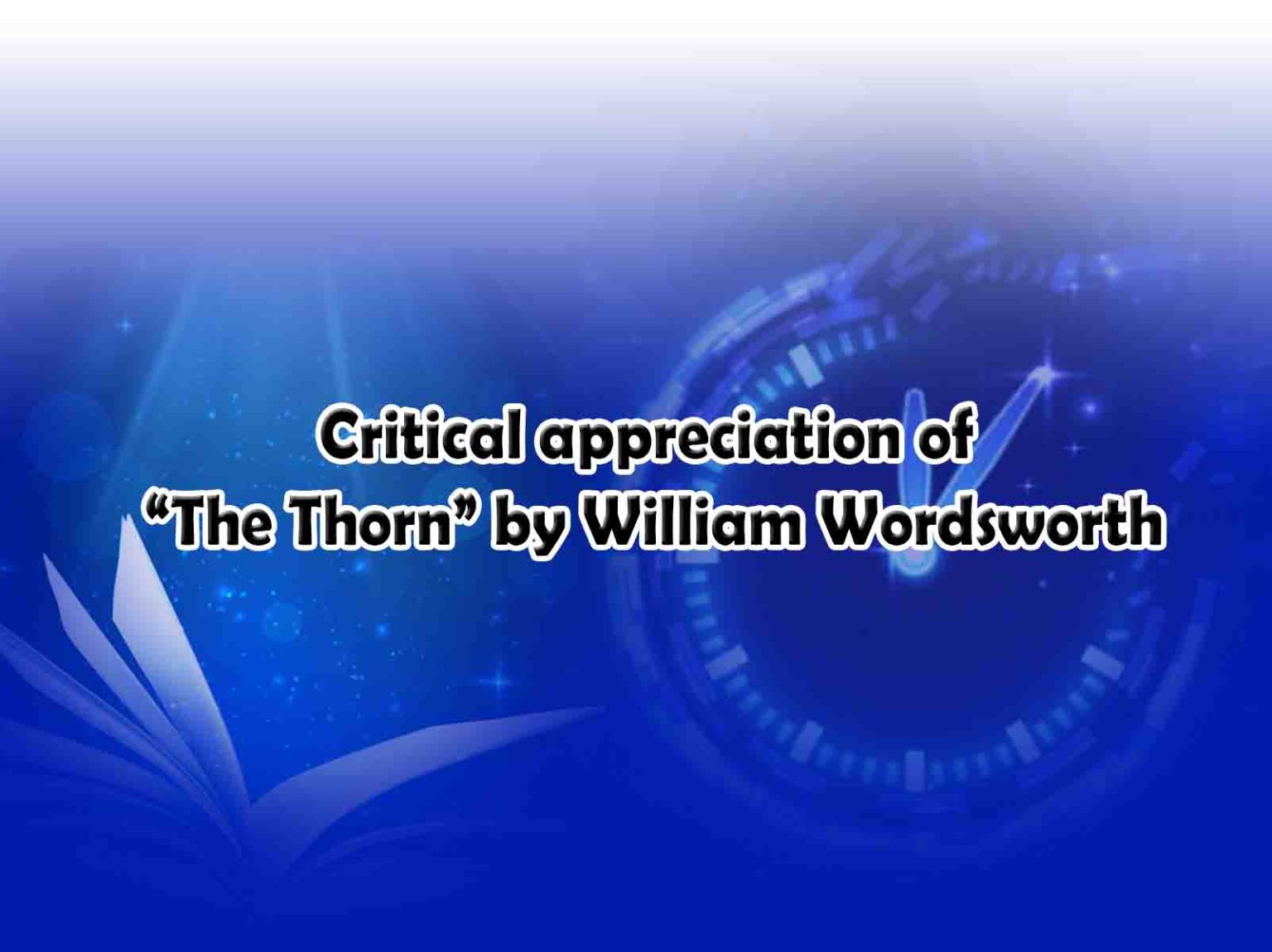 William Wordsworth composed the poem “The Thorn,” which was released in 1978. The poem was a component of a book of poetry. In “The Thorn,” a woman’s struggle to live with her immense loss and grief is depicted.

Lyrical ballads are a genre, as is Romantic poetry.

The tune has a very meditative tone, but it has a peculiarly mournful and gothic feel to it. The atmosphere is generally alternately depressing and suspenseful.

A first-person speaker who expresses the opinions and convictions of others; he may not be a trustworthy narrator.

A stormy day on Somerset, England’s Quantock Hill served as inspiration. A reinvented rendition of this site serves as the backdrop for the majority of the poem’s description and setting. The scene of the poem is very accurately characterized as being on a mountainside with a moss-covered thorn, a tiny pond, and a mound the size of a child’s grave.

Structure of The Throne

Poet has used Iambic tetrameter, 11 lines each stanza, with the exception of lines 4 and 9 of each stanza, which are in iambic tri-meter. The final two lines of each stanza include the lone rhyme, which is a complete rhyming couplet.

Summary of The Throne

The poem opens with a huge, pitiful, aged, and grey thorn standing straight up on a mountaintop. A muddy water pond, a mound of moss, and what appears to be an infant grave can also be seen on the mountaintop. A woman in a red cloak is crying out here, distressed. Martha Ray, the woman, cries nonstop while seated next to the thorn. In the past, Martha had been in a relationship with a man named Stephen Hill and had been quite happy. Stephen, however, turned her down on the wedding day before they decided to get married. There is no information on what happened to the baby after Martha gave birth to it.

The residents of the town are interested about the location of her infant; some claim that it was hanged, while others claim that she drowned it in a pond. No one even knows whether the infant was born alive. The infant, according to the villagers, is buried beneath the lovely moss that covered the mountain’s top. A gravestone could be represented by the mountainous stack, indicating that the baby has passed away.

On the top of the mountain, Martha cries endlessly next to the miserable thorn and the supposed baby burial. One brave and curious man scaled the mountain to discover Martha sitting on the ground and crying, “Oh misery! Oh, misery! Due to the societal negative stigma with an unmarried pregnant woman, Martha may have killed the child. There are still many ambiguous notions.

The thorn bush is described as being “like rock or stone” because it is upright.

“Cuts like a scythe” describes how the wind feels since it is so chilly and piercing.

The heap of earth is described as being “like an infant’s tomb in size” but is subsequently found to be exactly that.

The speaker compares the intricate pattern of the moss to the skilfully woven tapestry that a maiden might create: “As if by hand of lady fair/The work had woven been.”

The phrase “a fire was sparked in her breast” alludes to the pain and madness that will eventually grip Martha in the wake of Stephen’s betrayal and the baby’s murder.

The thorn in the line “There is a Thorn—it seems so old” stands for the contrast between good and bad and ugly and beautiful in life and in nature. The thorn serves as a metaphor for Martha’s suffering as it sticks in her side and continuously brings up the memory of her lost child.

“Like rock or stone, it is o’ergrown” has a heavy sounding long “o” sound, similar to how one feels while looking at a thorn that has been drawn down.

It is the repeating of the same starting consonant sounds in consecutive or closely related words, even when they are spelled differently.

The “w” consonant in “the work had woven been” flows like one might envision a tapestry being weaved.

The difficult to say “th” sound in the phrase “This sad woman thither goes” represents the tough ascent to the hilltop.

The repeated “w” sound in “And when the whirlwind’s on the hill” glides smoothly, much like the wind.

The repeated “s” consonant in “Whatever star is in the skies” flows smoothly and conjures up favourable celestial imagery.

“Sober sad” — the consonant “s” is repeated, producing a mellow sound that evokes the sense of calm loneliness.

Similar to other Romantic poems, nature is frequently personified in these works. For example, in “And this poor thorn they clasp it round/ So close, you’d say they were bent/ With plain and manifest intent/ To drag it to the ground,” the moss is personified as an enemy attempting to drag the thorn to the ground as one might do to a person.

The thorn is described as being “a sorrowful object desolate” and as being depressed.

The thorn is depressed and unpleasant, “a melancholy crop.”

These natural elements, “to thirsty suns and parched air,” are compared to thirsty people.

“Or frosty air is keen and still”, like a severe person, and is described as being frosty.

As if they were actual persons, the natural elements “know” Martha: “And she is known to every star,/And every wind that blows.”

The sensationalized superstitions of the villagers regarding the history of Martha Ray are presented as hyperbole. Additionally, Martha Ray cries out in a theatrical manner, “Oh misery! Oh misery /Oh woe is me! Hyperbole such as “Oh misery!” is used.

Difference between Romanticism and Classicism

Title of “The Crucible” by Arthur Miller

Justify The Crucible as Modern Tragedy

To the Lighthouse; Role of Women