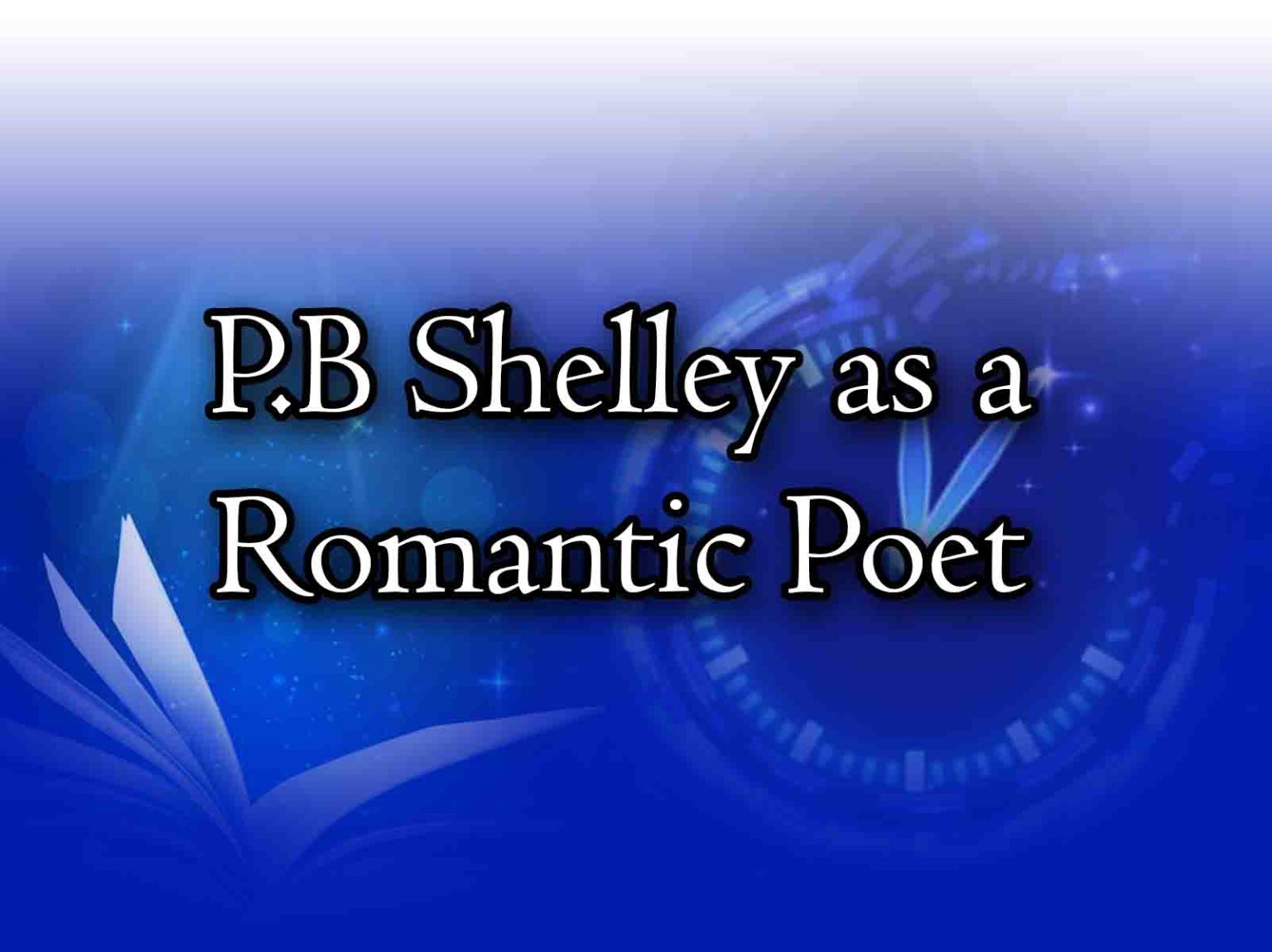 One of the most well-known English Romantic poets and a master of lyrical poetry in the English language is Percy Bysshe Shelley. He was born in England on August 4th, 1792. Shelly had extremely radical social and political beliefs, which set him apart from the accepted societal norms. He consequently did not become well-known while he was alive. However, after his passing, Shelley’s poems received more attention. The Romantic era, an artistic, literary, musical, and intellectual movement that began in Europe at the end of the 18th century, is known for its poetry. It lasted roughly from 1800 to 1850 and involved a backlash against the 18th-century principles of the Enlightenment.

Neoclassical poetry is composed of intellect and reason, in contrast to romantic poetry, which is created from feelings, sentiments, and the heart. William Blake, William Wordsworth, Lord Byron, John Keats, S.T. Coleridge, and Percy Bysshe Shelley are some of the most well-known romantic poets. Love of nature, imagination, melancholy, super-naturalism, Hellenism, beauty, idealism, and subjectivity are the main romantic themes found throughout Shelley’s poetry.

Shelley was a passionate admirer of Nature, just like the other Romantic writers. Shelley, like Wordsworth, sees Nature as one spirit, the Supreme Power, acting upon everything. The majority of his poems, including The Cloud, To a Skylark, To the Moon, Ode to the West Wind, and A Dream of the Unknown, glorify nature as their central theme.

He never gives colors to the things in nature; instead, he describes them as they are. By personifying them, he gives them human life, but he does so unwittingly since he believes they are living creatures capable of carrying out human duties. He is the greatest romanticist of his day due to his mythopoeic power. His “Euganean Hills,” where he is calm and comforted by the natural scene all around him as well as the fictitious land, demonstrate his belief in the therapeutic power of nature.

Romantic poets are known for their emphasis on the quality of imagination. According to Shelley; we don’t wish to know facts in poetry, history, people’s personal lives, satire, or panegyric. They are the many distractions and random points on which we rely and to which we apply those delicate and fleeting mental hues that language communicates, delighting and enlightening us in precisely the right amounts. Poetry, according to Shelley, is “the manifestation of imagination” because it brings disparate elements together harmoniously rather than dividing them through analysis.

Shelley ventured into the unknown with courage, and he believed his justifications should be based on his imagination. His mission was a success once he had persuaded the public that imagination’s function is to dream up images through which reality may be made known to the outside world.

Melancholy (sad emotions) is a prominent theme in romantic poetry because it served as a key source of inspiration for the Romantic  authors. Even though Shelley believed in the spirituality of humanity and was a man of hope and optimism, he portrays himself in his poems as a man of bad luck who is subject to evil and pain. In his “Ode to the West Wind,” he states the following:

I fall upon the thorns of life, I bleed!

A heavy weight of hours has chained and bound

Most Romantic poets included supernatural themes in their works. The supernatural is a recurring theme in Shelley’s writing. His poems’ use of ghosts and spirits raises the prospect of seeing a world other than our own. The speaker of “Hymn to Intellectual Beauty” goes in quest of ghosts and says that they are one of the ways that men have attempted to understand the world beyond.

In the cave of “Poesy,” the speaker of “Mont Blanc” comes upon ghosts and the spectres of actual natural items. Ghosts are insufficient in both poems: the speaker does not meet any ghosts in “Hymn to Intellectual Beauty,” and it is discovered that Poesy’s ghosts in “Mont Blanc” are not genuine, highlighting the quickness and mystery of supernatural powers.

The Romantics put a high value on the world of ancient Greece. Greece’s ancient name, Hellas, inspired Shelley to write “Hellas.” Ancient Greeks referred to Ramses II of Egypt as “Ozymandias.” Platonism was a major impact on Shelley. According to Plato, the spirit of beauty is the ultimate force in the universe. In his metaphysical poem “Hymn to Intellectual Beauty,” Shelley refined this idea, which he had originally taken from Plato.

Man must love intellectual beauty because it is supremely powerful. Shelley’s Platonic representation of human life is found in the final verse of “The Cloud.” In reality, Shelley regularly used Greece as a source of inspiration for his works, using it as an example of ideal beauty, transcendent philosophy, democratic politics, and homosociality or homosexuality.

Another Romantic element in Shelley’s poetry is beauty. For Shelley, what he refers to as “Intellectual Beauty” is beauty as an ideal and a smaller version of the beauty of nature. He venerates beauty as an enigmatic force. When intellectual beauty is away, the universe becomes a “dim huge vale of tears, vacant and forlorn,” and if the human heart is its temple, then man would become immortal and omniscient, according to the spiritual arts.

Man were immortal and omnipotent

Did’st thou, unknown and awful as thou art,

The poetry of Shelley also has a romantic tone. It resembles William Wordsworth’s style to some extent. He employs a lot of potent imagery and symbolism, particularly in the visual sense. The beautiful similes Shelley uses throughout “The Skylark” demonstrate its romantic passion. His speech has a deep, sensuous quality. However, he never employs any ornamental words, and each word has its own place and significance. They use musical sounds that are pleasing to everyone’s ears to convey the poet’s range of emotions. One of the best examples of terza rima in an English-language poetry is found in his “Ode to the West Wind,” which also happens to be one of his works.

In a conclusion, we might say that Shelley’s poetry is passionate throughout. Among the Romantics, only Shelley possesses the joy, the humility, the confidence in humanity, and the optimism that made him one of the most important English writers of the early nineteenth century. Shelley is the Romantic who most obviously possessed the quality of genius—quickness, intellect, the aptitude to pick up languages quickly, and the capacity to comprehend and apply scientific concepts and discoveries. His untimely passing earned him the iconic stature of the sad Romantic artist like Byron and Keats. It makes sense why Shelley is regarded as the greatest poet of the Romantic era.

To the Lighthouse; Role of Women