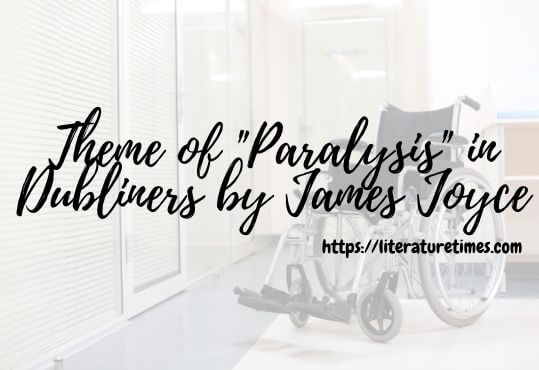 Intensive study of Joyce’s Dubliners has shown that this collection, once regarded as a set of bare, episodic stories, is a tightly pattered work depending on symbolic details to clarify its meaning.

At the time Joyce began this work, he was much interested in the medical field. In 1902 he entered medical school in Dublin, later went to Paris to study medicine, and after his return in 1903, associated with medical students. During this period, he tended to use medical terms in his writings. Like most medical students, he was fascinated with diagnosis. He told his brother, “What’s the matter with you is that you’re afraid to live. You and people like you. This city is suffering hemiplegia of the will.”

When he had finished only the first story, he stated, “I am writing a series of epiclesis-ten-for a paper… I call the series Dubliners to betray the soul of that hemiplegia or paralysis which many consider a city.”

The structure of Dubliners reflects a therapeutic approach. Joyce informed his publisher that he aimed to “write a chapter of the moral history” of Ireland and that Dublin was the scene because it seemed “the center of paralysis.” The stories were to be presented “under four of its aspects: childhood, adolescence, maturity and public life.” Implicit in this scheme is a personification of Ireland as a sick, even dying individual.

We also find epiphany to the book as a whole. Thus, each story is complete in itself, dealing with a psychologically paralyzed character or group and the larger structure a symbol of a single stage in the paralytic process.

In each group of stories, Joyce translates the central image of paralysis into a more specific one appropriate to the group’s subject matter and reflects paralysis of the most vital function characteristic of that stage of life. For example, in childhood, this function is emotional and psychological development of self as preparation for life; in youth wise and free choice of the primary goals in life; in maturity ability to achieve these goals; and society as a whole, cultural achievements of a high standard in various fields.

To illustrate childhood, which is a time of innocence when the world seems better than it is. Hence, the destruction of a child’s sense of illusion can be a psychologically traumatic blow. In the first group, the plot image is disillusionment. In adolescence, when the individual’s normal development, proper choices of mate and vocation must be made, whatever hampers voluntary choice in these two vital life decisions stultifies the individual and paralyzes his will.

Read About: The Concept of “Death” in “Dubliners” by James Joyce

In public life stories where it is presumed that a healthy, functioning society must express itself in ethical and intellectual achievements of a high order, the failure or inability to do so is represented by images of corruption. Thus, each story is a symbol of the central paralytic theme.

The tales in succession show a decline in the characters’ reactions from a painful realization of a situation to almost total unawareness. In the stories of public life, this paralysis of activity and perceptivity permeates all social relationships. Epiphanies, partial or whole, to the characters, are in the first half of the stories, but they become progressively less so from the pivotal eighth story. The original fourteen stories are brief, objective episodes whose significance is largely implied: plot images and symbolic details convey the whole meaning.

For Joyce, paralysis is a kind of living death, or rather a succession of deaths, emotional, psychological, or spiritual, details of darkness, cold, night, winter, and blindness image this process. Thirteen of the present fifteen stories occur at the end of the day, at twilight, or actually at night. Most are set in landscapes of frigid cold.

In contrast, the motif of life, which Joyce meant necessary action or escaped, is symbolized by images of growth, light, motion, water, or flight. Moreover, historical and literary allusions often suggest paralysis has symbolic significance.
The framework of Dubliners is a balanced four-part grouping of stories, the first and the last parts having three stories and the middle sections four each in matching pairs. Each also represents a stage in the paralytic process and is unified by a paralytic sub-image familiar to itself.

Group one in Dubliners (The Sisters, An Encounter, and Araby) is carefully structured. All stories are told from the viewpoint of young boys who are lonely, sensitive, and fatherless. Specific images or motifs are associated with these boys: a father-figurative representing permanent values and authority, desire for escape or flight to freedom, and two of their association of idealism with a chalice.

The three stories represent a progression. In “The Sisters,” the child-hero discovers an old, paralyzed priest who had been tutoring him in the church. But at the priest’s death, he realizes that others associate the priest with materialism and decay. In the wake, he perceives intuitively in the priest’s paralysis the stagnation of his society and senses in the hands which are only “loosely retaining a chalice” the failure of Christian mission. The story is shrouded in details of darkness, symbolic of the child’s loss of innocence.

In “An Encounter,” two boys, already dissatisfied with their father-dominated school society, seek escape, hoping to find elsewhere. Deciding that adventures “must be sought abroad.” Their adventure is meeting an older man who authoritatively gives them advice on books and sex. But, to their hatred and fright, he turns out to be a pervert whose psychological paralysis is imaged in his conversation, which “as if magnetized… seemed to circle slowly round and round its… center.” The story depicts more than a meeting with the pederast; it images the sterility of ambition in Irish society.

For the boy of “Araby,” shades of the prison-house are already closing. Living on a blind street in a “musty” house formerly tenanted by a dead priest, reading dill books inherited from him, wandering amidst the commercialism of the markets, he realizes his environment is hostile to his illusions. He meets disillusionment at the bazaar whose romantic name he associates his idealistic emotion with an older girl. Its emptiness, church-like silence, and commercialism strip him of illusion.

Read About: James Joyce’s Use of Ellipsis in “The Sisters”

In this group, disillusion is the plot image. The heroes successively find wanting the three strong emotions of faith, hope, or ambition for the experience. The child of “The Sister” hides under the bedcovers from his terrifying dreams of the priest; the boy of “An Encounter,” panic-stricken for fear the pervert catches him, runs back to the associations; he had formerly “despised.” In each case, disillusionment and failure to escape have resulted in emotional injury.

The second group (Eveline, After the Race, Two Gallants, and The Boarding House) represents several young people, all unsettled in life, all facing the vital choices of mate and vocation, and all so paralyzed. This group is the logical outcome of the previous one in that characters are already injured by their experience with a society that voluntary choice is almost impossible. The paralytic sub-image of this group is the trap.

In these stories, wholesome vocational choices have been rejected for less wise ones, but in the next pair, “Two Gallants” and “The Boarding House,” the alternatives are neither wise nor right. The choice of love and work shows that the plots of both blends into one situation. The two gallants are penniless ne’er-do-wells who seek to trick out of her savings a servant girl, whom one of them has already seduced. For Corley, love is purely mercenary, and an ultimate irony, the trapper, is trapped. The paralysis which immobilizes character is subtly presented by two images from Tom Moore’s songs.

“The Boarding House” presents a trap sprung on a sober young man by a conniving mother and daughter. Although Doran agrees to marry a girl he does not want, out of concern for conventional morality and fear of losing urged “him to remain free,” and he “had a notion he was being had,” he cannot face the realities and risks of action.

Sterility dominates the third group (A Little Cloud, Counterparts, Clay, and A Painful Case). Paralysis will lead logically to that of action, for in a society where individuals lack freedom in making the vital decisions of life, the result is frustration and non-productiveness. These characters are already trapped by life, having made constraining choices earlier.

The second pair of stories shift the emphasis from careers to family life. “Clay” and “A Painful Case” are carefully matched tales about two celibates. Sterility is imaged in the characters and plots. The tragedy lies in the barren waste of their lives. In “Clay,” circumstance has doomed a woman with the potentialities of an ideal mother to a solitary, empty life. Her companionship is “like a warm soil” in which his nature begins to “open. Finally, she dies of alcoholism and becomes a mere shade of a man, without friends or completely paralyzed in feeling as in act.

In these two tales, Joyce suggests the final total paralysis of physical death, which the characters must face in addition to the sterility of action. The growing paralysis of perceptivity that Joyce shows as a pattern in Dubliners is especially evident in this group as one proceeds from Little Chandler’s self-pity through Farrington’s unthinking resentment to Maria’s shy disappointment and finally to Mr. Duffy’s severe frigidity.

The fourth group, the stories of public life (“Ivy Day in the Committee Room,” “A Mother,” and “Grace”), shift focus. In a logical extension of Joyce’s central image of the hemiplegic, they treat the effects of paralysis upon society as a whole. In addition, the stories give a panorama of religious, governmental, and artistic activities.

In the present form, Dubliners ends with a fully developed story, “The Dead,” which acts as a kind of coda for the collection in its theme, structure, and central images. It pictures life in Ireland as paralysis and death. In the end, Joyce suggests, as he had in all the stories of public life, that people who live meaningless lives inactivity are the absolute dead, not those who have passed “boldly into that other world, in the full glory of some passion.”

In Dubliners, Joyce gives the case history, tracing a paralyzing disorder from its first partially observable effects by increasing prostration degrees to a final immobilizing stroke. He shows the Irish people as successively paralyzed in emotion, will, action, and social values. The “moral history” Dubliners present is a long decline, and the prognosis for the patient is dead.