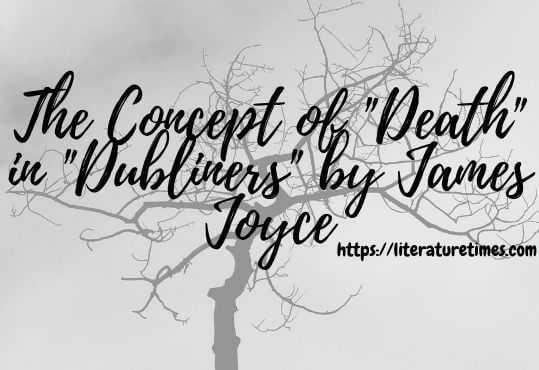 James Joyce has manipulated the concept of death intensively in Dubliners. ‘Death’ is a common point in many fields such as philosophy, sociology, and literature. Therefore, themes such as death, routine lifecycle, moral and material paralysis of some characters are common in literature.

Dubliners consists of fifteen short stories. Although the stories are about different events and characters, the commonality of the themes mentioned above causes coherence in Dubliners in the sense of style. This unity provides fluency in the reading of the stories.

In Dubliners, many stories are inter-related to death in one way or another. Joyce applies death as a functional theme in his stories, whereas some are strongly affected by the same subject.

The first story of Dubliners is “The Sisters,” and the story starts with Father Flynn’s death. In this story, ‘death’ functions as access to the story. The narrator of this chapter is a young, unnamed boy who is also the story’s main character. There used to be a strange relationship between the priest and the boy, and it is evident that the boy is disturbed by the priest’s manners. There is a kind of anxiety in his behaviors. The death unveils the relation between the priest and the boy. The priest intends to make the boy a priest without paying attention to the boy’s consent.

In this respect, it can be suggested that the boy is waiting for the priest’s death impatiently. When Flynn dies, the adults are looking forward to seeing the boy’s disappointed reaction. However, the boy shows no expressions as if nothing has happened. On the contrary priest’s death causes a sense of relief in the conduct of the boy. This incident is the boy’s first experience with death.

‘Paralysis’ is a theme used both morally and materially by Joyce in Dubliners. In “The Sisters,” it is used in both ways. Father Flynn becomes paralyzed before his death. In addition to paralysis, his strange behaviors indicate that he becomes mentally disabled. In this regard, unlike the morally paralyzed characters, his death is an escape from the life which gradually becomes a burden for him. As he dies, he becomes free from physical paralysis, however; some other characters remain paralyzed morally. His death affects the living does not come to an end.

Read About: James Joyce’s Use of Ellipsis in “The Sisters”

‘The Sisters’ is utterly formed around the theme of death. This indicates that the same theme will often be applied in the following stories. Death and the paralyzed characters, the life of Dublin are some of the common subjects dealt with in the first story.

‘Eveline’ is another story in which we observe the dead person’s haunting. Eveline is the main character who used to have a happy childhood when her mother was alive. After her mother dies, she assumes full responsibility for the family. Because of the death, life becomes a heavy burden for her. She has two options; staying at home to take care of her family or leave Dublin with Frank, her lover.

The death’s influence continues profoundly on the conduct of Eveline. Frank waits at the dock to save her from her misery. But Eveline becomes spiritually paralyzed at the time of departure. Although Frank’s all efforts, she does not move and leaves his hands. She sacrifices her only chance of happiness for the sake of her dead mother’s wish. She cannot revolt against the routinized lifecycle. The routine has defeated her. Her wish for a new life contradicts her lack of courage to leave the routine. Moreover, her want for freedom conflicts with her promise to her mother.

“Her eyes gave him no sign of love or farewell or recognition.”

She looks as if she is paralyzed. It is not possible to determine what she feels, what she thinks. She appears emotionless. It can be the result of the shock of losing her only chance for happiness. She is not capable of substantiating her dreams. The dead person is the most potent reference on the vital decisions of her.

‘A Painful Case’ is true to its name story. James Duffy is an unadventurous man who is another victim of a typical lifecycle. He is an emotionally dead person. He accidentally meets Mrs. Sinico, and unexpectedly they become friends. Mrs. Sinico’s small display of endearment frightens Duffy, and he abruptly decides to break up this relation.

After the breakup, Duffy turns back to his routine life. Duffy lives in an illusion. He is not aware of the external reality. He is conservative and very rigid against the change. Mr. Sinico is a person for him to awaken the dead emotions. But his reaction to Mrs. Sinico’s straightforward approach is very severe. As Duffy stops meeting her, he loses his chance to escape from the illusion.

James Duffy is a highly self-centered character. His reaction to the death of Mrs. Sinico is striking evidence of his selfish personality. The reader will anticipate seeing a regretful Duffy who thinks himself responsible for the death of Mrs. Sinico. But, on the contrary, Duffy represents a very meaningless reaction. He loses his temper, and her death seems like commit suicide, not an accident.

Mrs. Sinico is physically dead, but Duffy is a living dead. Mrs. Sinico could have brought him to life; escaped him from his deadly routine of life. Instead, however, Duffy drags her to physical death and himself to moral death. Duffy begins to re-evaluate his life after Mrs. Sinico’s death. His false happiness shatters. His self-centered concern becomes reversed to his environment. The death of Mrs. Sinico is painful, but Duffy’s realization of his moral death status is more painful.

The last and longest story of Dubliners is titled ‘The Dead.’ This story has received more scholarly attention when compared to the rest of the stories. However, the name of the story is meaningful in respect to the general atmosphere of other stories.

This story progresses around Gabriel Conroy. Gabriel is another selfish character of Joyce. His intellectual superiority to the others at the party, except Miss Ivors, is real, but the problem is that Gabriel has come to equate intellectual power with human supremacy. In addition to his disparaging people around, he feels ashamed of Ireland. He clearly defines his distaste for his own country. All these facts make him a disgraced character in the scope of Joyce’s criteria of patriotism.

Gabriel’s resolution does not last long as he finds out about the incident with Greta’s former lover Michael Furey. At first, Gabriel is prejudiced about what happened. When he becomes aware of the contents of the incident and especially about the boy’s death at an early age, he feels ashamed. The death of the boy makes him deeply moved, and he begins to change. Unlike other characters of Dubliners, Gabriel does not become paralyzed. Instead, death awakens him from his illusion. His selfish personality shatters, and his energy turns from himself to his environment.

James Joyce’s Use of Ellipsis in “The Sisters”

Lacanian Analysis of “The Kite” by Somerset Maugham

Waiting for Godot as Tragicomedy

Discuss Adrienne Rich as a Poetess