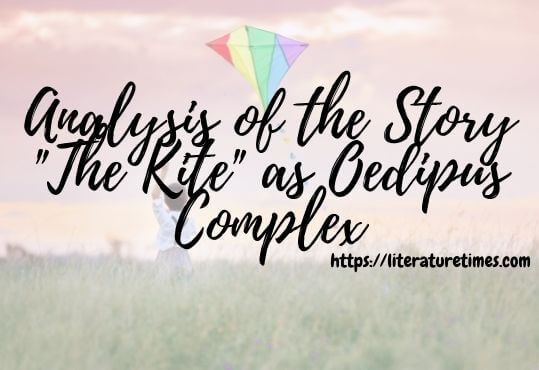 The Kite by William Somerset Maugham is a study of explicit psychological theories regarding specific characters. The central theme of the story is Oedipal, and it has been examined in all its ramifications. The storyline relies on the primal relationship between Mrs. Beatrice Sunbury and her son Herbert. Here is replete with psychological truths, revealing attitudes, situations, and emotional states.

The name of Oedipus has been borrowed from the classical story of king Oedipus who unknowingly married his mother and had children with her. The psychologists, Sigmund Freud, and others use the term Oedipus complex to manifest infantile sensuality within the child’s relations to its parents. It is a state during which an individual reveals extreme affection for the parent of the opposite sex to him or herself and corresponding distance from others’. A significant part of his life is managed by these unconscious desires and passions, over which he has no control.
The over-possessive mother exercises a bad influence on the emotional growth of the growing boy. From the very early days, Mrs. Sunbury wishes to nurture her son as self-centric and possessive; her advice to her son is kind of understandable.

She says, “Now, Herbert, do what I do, keep yourself to yourself, and don’t have anything to do with them than you can help.”

Even she doesn’t permit a single independent assertion on Herbert. Hence, when Herbert is twenty years of age, holding a steady job, Herbert’s father, Samuel Sunbury, asks if Herbert be get married. Mrs. Sunbury’s reply is sharp and cruel.

Read About: Summary and Analysis of A Pair of Silk Stockings by Kate Chopin

She answers: “I don’t hold with a man marrying till he knows his own mind’….. “And a person doesn’t know his thoughts until he’s thirty or thirty-five.”

Such a typical unfavorable response clearly shows a jealous mother unwilling to share her son with a wife and trap her son’s soul and ruin his personal.

Herbert loves her mother almost like a mother-lover. The mother is the very axis and pole of his life. The bond between this mother and her son deepens after they fly the kites as fancy and passionate, almost like a ritualistic way every Saturday. Flying kites is like imaginary escapism from the monotony of life. The soul of Herbert is so possessed by the mother figure that this kite flying is like nearing the mother, denying the rest of the attraction.

Herbert’s love for Betty and his choice of getting married to her is a desperate attempt to free himself from the extreme attachment to his mother. But he can not give to Betty what he has already given to his mother, ensuing within the horrible and torturing battle inside him.

Mrs. Sunbury dislikes Betty, who will suck all her Son’s Soul and leave nothing for her. Therefore, she does her best to interrupt up their relationship. The Oedipus complex in him has weakened and stunted emotionally.

In the kite, the entire story is given symbolic significance via flying a kite. It is an act of affectionate attachment. Yet, even it’s not a plaything, instead of an extension of Beatrice’s control over her son. After the wedding, Betty objects to and rebels in opposition to Herbert’s flying of the kite on Saturdays and his parents. She dislikes this childish act and warns Herbert to do that foolish favor. But Herbert’s fatal attraction for the kite is a string of mother fixation.

Mrs. Sunbury pulls the thread of the kite to control her son. When all of the attainable pleadings end in vain, Betty hacks down the kite, which finally aggravates the situation. Herbert chooses the jail instead of providing the alimony to his wife. The smashing of the kite is a type of matricide for him which he can’t forbear.

The whole complication of the story can thus be read via the Freudian complexes. Maugham is an explorer of human relationships, and in this story, he has studied sex relationships from entirely different angles. Mrs. Sunbury and Betty are both wrongs in being too possessive. Both of them want to possess the soul or the personae of Herbert. But a good relationship results once we acknowledge the otherness of the other people. The mother fails to recognize this reality and so ruins the life of Herbert.