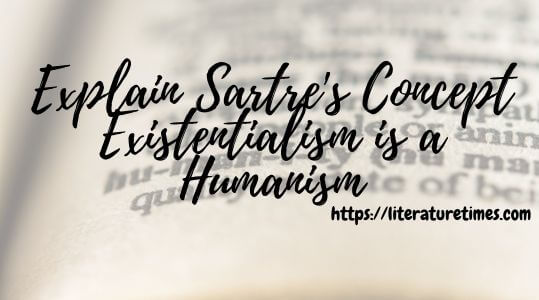 “Existentialism is a Humanism” is a 1946 essay by Jean-Paul Sartre and it’s meant to be an answer to those who regarded existentialists as pessimistic.

Jean-Paul Sartre was a French philosopher who is best known for his theory of existentialism. He believed that people are defined by their choices, not by anything else that they cannot choose, such as social class or nationality. This concept, which is also called humanism, can be interpreted in different ways.

Existentialism is a humanism that affirms this as the only truth: existence precedes essence. That’s to say, an individual’s existence doesn’t need a predetermined set of characteristics in order to exist. The essence follows from the existence. Humanism is a philosophical and ethical stance that places the human being at the center. Humanist thinkers usually reject religions in favor of their own moral sense.

Sartre used this philosophy in his existentialism, which states that humans are free to do anything they want but they are ultimately responsible for it. Sartre would agree with humanism as he believed that human beings are the most complex of all created things. Sartre’s concept is not so much about existentialism, but more of a contrast to it.

Existentialism is, at its core, an expression of humanism – the belief that humans have the freedom and responsibility to create themselves. This humanistic philosophy is centered around the idea that existence precedes definition.

Sartre’s existentialism is a humanist philosophy. It emphasizes the individual, freedom, and free will. This conception of life questions traditional religious notions of God, morality, and the afterlife. Sartre believed that people are responsible for their actions without any excuses or exemptions while also being free to determine their own actions. Here’s is the summary of Sartre’s existentialism in this quote: “existence precedes essence.”

This means that humans are not in control of their own purposes in life. Humans choose (or assume) purposes for themselves, but these purposes do not come with an inherent meaning. Existentialism is a philosophical and literary movement that was popular in the 1940s and 1950s. There are different definitions of existentialism, but one thing they all share in common is their focus on human existence and its meaning.

In what sense is existentialism a humanism?

Read About: The Concept of Authentic Existence in Existentialism

Existentialism is a humanism because it acknowledges that humanity has no inherent meaning or purpose–thus the meaning and purpose of their lives are determined by what they make of themselves. Sartre’s first point is that existentialism is a humanism because one can consider it as an affirmation of our freedom. Sartre talks about the question of “being” and says that, on one hand, we are free to choose our own projects.

Sartre is saying that human beings are free to make their own decisions, and only they can determine what they will do. If someone commits suicide, it’s not because there was some external force compelling them to commit suicide. That person chose to commit suicide with all the knowledge of what would happen.

Existentialism is a humanism because it places the human being at the center of its world and demands that we take responsibility for ourselves and our actions. This is a central tenet of existentialist philosophy, which is in stark contrast to philosophies like Christianity. When the world is in a terrible state, when there is no order or meaning in life, Sartre tells us that we have a responsibility to make meaning in our lives. The existentialist humanism seeks to go beyond what’s expected and take ownership of one’s existence.

Existentialism is a Humanism is an approach to creating meaning in life. Meaning, for Sartre, is subjective and personal; it does not come from religion or tradition. One cannot deny their desires and wants, but must accept them as part of one’s character. What the person chooses to do with those desires and wants will form one’s life project.

In conclusion, Sartre’s notion of existentialism as a humanism is very accurate. It emphasizes the importance of people and their freedom to live life as they want, which can be both destructive and constructive. It seems to me that Sartre’s idea is a very good representation and solution for the problems of mankind.

I hope this essay has helped to dispel the myth that existentialism is a dark, pessimistic philosophy. Sartre reminds us that our existence precedes our essence, which means we are free to create our lives as we choose. There are few philosophies as dedicated to the humanistic idea that each individual’s happiness is of equal importance as any other person.

Importance of Lucky’s Speech in “Waiting for Godot”

What Were the Answers of Sidney on Charges on Poetry?