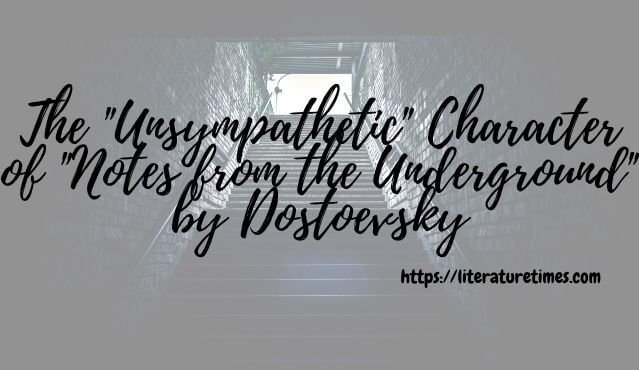 In his confessional writing, “Notes from the Underground,” Dostoyevsky makes the character reprehensible and unsympathetic because it is exactly this state of mind that makes him conflicted between his Russian ideals and western philosophies. He holds many of the Russian values accountable for many of the problems in the life of the underground man. He also rejects the assumptions that society has about a person like the underground man. We feel sympathy for him because the text is itself manipulative in making us think that the underground man is a victim. We see some kind of hope for him to escape when he tries to rescue Liza. But, his values and principles again show up and prevent him from showing kindness and love to Liza, which was his only chance at escaping the underground. The fallacies we see of the underground man is mostly rationalism and a belief in a utopia where everything is well. It also emphasized how modern society has enslaved the minds of people.

Read About: What is American Dream? Explained in Detail

Reflection of Dostoevsky’s antihero in “Notes from the Underground”

Dostoevsky’s Notes from Underground was a revolutionary novel for its time; Dostoevsky crystallized existentialist writings into the depiction of an anti-hero paralyzed by his own consciousness.

The atypicality of the novel stems from the overarching in-action of the anti-hero, the underground man. The narrator, the underground man, knows that he is an innocent victim of injustice, but wallows in his own degradation and inaction. Dosotevsky hasn’t given us a tragic hero, but rather someone despicable – a faceless government clerk who retired from a useless office because of an inheritance he has already consumed. However, in his fruitless attempts to prove he is more than a nobody, which inevitably slide back into his feelings of being trapped, Dostoevsky presents the malaise of the 20th century embodied in the narrator. Without any religious or moral imperatives, every decision is necessarily riddled with doubt due to the variety of consequences that every action could have, the pros and cons that can be made about any statement concerning the possible action, and the multiplicity of different motives that inform every decision. This overwhelming complexity paralyzes the narrator and prevents him from taking action in anything. His plight stems from his non-action, as opposed to tragic heroes’ downfall coming from their actions and moral convictions.