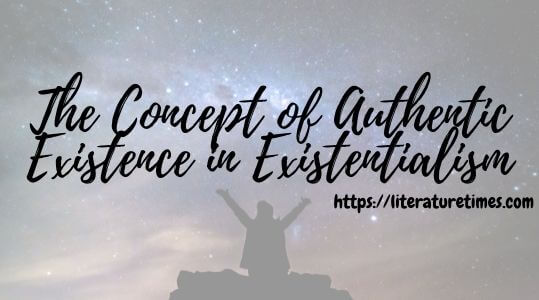 For Sᴓren Kierkegaard, the term ‘existence’ has almost the same sense as ‘authentic existence’ as used by some modern existentialist philosophers. The ‘existing individual’ is the one who strives resolutely towards an end which cannot be realized once and for all at a moment and is thus in a constant state of becoming, making himself by his repeated acts of choice.

Kierkegaard attacked the society of the 19th Century for it was bent on thwarting individualism and instead supported communal approach to life. He said, ‘Each generation has its own characteristic depravity. Ours is perhaps not pleasure or indulgence or sensuality, but a dissolute pantheistic contempt for individual man.

According to Kierkegaard, as Frederick Copleston explains, if one can be said to think, feel and act in such a manner that one’s opinions are dictated predominantly by what the ‘one thinks’, his emotive reactions by what the ‘one feels’, and one’s actions by what the social conventions of one’s environment, he is a member of the ‘one’, a member of an impersonal collectivity, rather than this or that individual. This existence that is immersed in ‘the crowd’, ‘the public’, or a life governed by principles originating from external sources, other than the individual concerned, is not authentic.

Authentic existence in Kierkegaard’s philosophy is the rise of the individual to claim his position in his life as the author of his own existence. As Fr Copleston explains, according to Kierkegaard, if one realizes one’s anonymous status, so to speak, and forms one’s own principles of conduct and to act resolutely under them, even if this means acting in a way quite opposed to the customary ways of acting of my social environment, there is a sense in which I can be said to have become more of an individual, although in another sense he is no more or no less an individual than he was before.

For Kierkegaard, man has three spheres of existence:

A man can ‘exist’ in the aesthetic sphere if he deliberately, resolutely and consistently acts as the aesthetic man, excluding alternatives. In this sense, Don Juan typifies the ‘existing’ individual within the aesthetic sphere. The antithesis to the aesthetic consciousness is ‘despair’ for the aesthete realizes he is living in the ‘cellar of the building’, with no remedy, no salvation at the level on which he stands. He thus encounters either/or situation where he decides by an act of commitment either to remain aesthete, or to move up the ladder to the second, the ethical sphere.

The ethical man, in the second sphere, accepts determinate moral standards and obligations, the voice of universal reason, and thus gives form and consistency to his life. He strives after fulfillmenting a moral ideal which beckons him ever forward. This sphere could produce what Kierkegaard calls ‘tragic hero’ who, according to him, ‘…renounces himself in order to express the universal’. The examples of Socrates and Antigone are supplied. The ethical man eventually becomes conscious of his lack of self-sufficiency and of his sin and guilt. In fact, this consciousness of sin forms the antithesis to the ethical stage, and it is overcome only the leap of faith by relating oneself to God.

The religious sphere, according to Kierkegaard, has attained the highest self-actualization by relating to God, not as the universal, absolute Thought, but as the absolute Thou as embodied in the sacrifice of Abraham. Kierkegaard says, ‘…to relate oneself to God is a far higher thing than to be related to the race and through the race to God’.

He begins in his early writings by criticizing the ethical attitude in so far as it involves the assertion of a universal moral law and of absolute moral values. In Beyond Good and Evil, Nietzsche presents two kinds of morality: slave and master moralities.

In Joyful Wisdom, Nietzsche remarks that ‘the greatest event of recent times is that “God is dead”, that belief in the Christian God has become unworthy of belief- already casts its first shadows over Europe… At last the horizon lies free before us, even granted that it is not bright; at least the sea, ‘our sea’, lies open before us. Perhaps there has never been so open a sea.”

Read About: The Myth of Narcissus in Greek Mythology

Copleston explains that this view obviously implies that the concept of God is hostile to life. Nietzsche says, as Copleston reports, in The Twilight of Idols, ‘The concept of God was up to now, the greatest objection against existence.’ In The Antichrist we read that ‘with God, war is declared on life, nature and the will to live. God is the formula for every calumny against this world and for many lie concerning a beyond’.

Nietzsche admits that religion, in some phases, has expressed the will to life. His general attitude is that belief in God, especially the Christian God, is hostile to life, and when it expresses the will to power, the will in question is that of the lower types of man. With the supposed death of God, there looms the danger of nihilism, both passive and active. Passive nihilism is the pessimistic acquiescence in the absence of values and in the purposelessness of existence, while active nihilism is that which seeks to destroy that in which it no longer believes. Nietzsche prophesies active nihilism in Europe that would be caused because the European man knows only ‘the morality’ which is canonized by Christianity and given a theological foundation.

Therefore, for Nietzsche, the termination of God is a necessary requisite if man is to exist authentically. Authentic existence, in his philosophy, is embodied in the Superman, who represents the ‘ascending life’. He contends the masses are necessary to an end, the emergence of the higher type of man. This higher caste man would be highly cultured, skillful in all bodily accomplishments, tolerant out of strength, regarding nothing as forbidden unless it is weakness either under the form of ‘virtue’ or under that of ‘vice’, the man who has become fully independent and affirms life and the universe. Übermensch is the true human and man is but a connection between the animal and the true human.

He is famous for his statement that ‘there is only one serious philosophical problem, that of suicide. The judgment of whether life is or is not worth the trouble of being lived is a reply to a fundamental question of philosophy.

Camus explains that a clear-sighted man comes to realize that the world is not rational, with no determinate purpose or meaning. This leads to the feeling of the absurd which can arise in a variety of ways; through, for example, the perception of nature’s indifference to man’s values and ideals, through the recognition of the finality of death, or through the shock caused by the sudden perception of the pointlessness of life’s routine. Hence, the problem of suicide; for ‘to see the meaning of life is dissipated, to see our reason for existing disappear, that is unbearable’.

According to Camus, the philosophical attempts to overcome the feeling of absurdity bring us to the point of ‘philosophical suicide’, since by indulging us and providing us with illusory ‘reason for living’ it also provides us with an ‘excellent reason for dying’. One who requires reasoned arguments for living and finds them in a particular ideology endangers his life when that ideology collapses.

In the effort to shape an authentic life in a world of immanence, the way is the goal, for there is no goal at the end of the way. Although his efforts lack purpose, and there is no chance he will fulfill his longings, ‘one must imagine Sisyphus happy’; otherwise, one would have to commit suicide. The feeling of absurdity enables one to attain happiness and secular, ‘godless holiness’.

According to him, though the man in the absurd lives without God, he can still devote himself in a self-sacrificing manner to the welfare of his fellow men. If he does so without hope of reward, and conscious that in the long run it makes no difference how he acts, he exhibits greatness of man precisely by this combination of recognition of ultimate futility with a life of self-sacrificing love. According to Camus, it is possible to be a saint without illusion.

Notes From underground as an Existentialism novel

What is the Basic Concept of Naturalism?