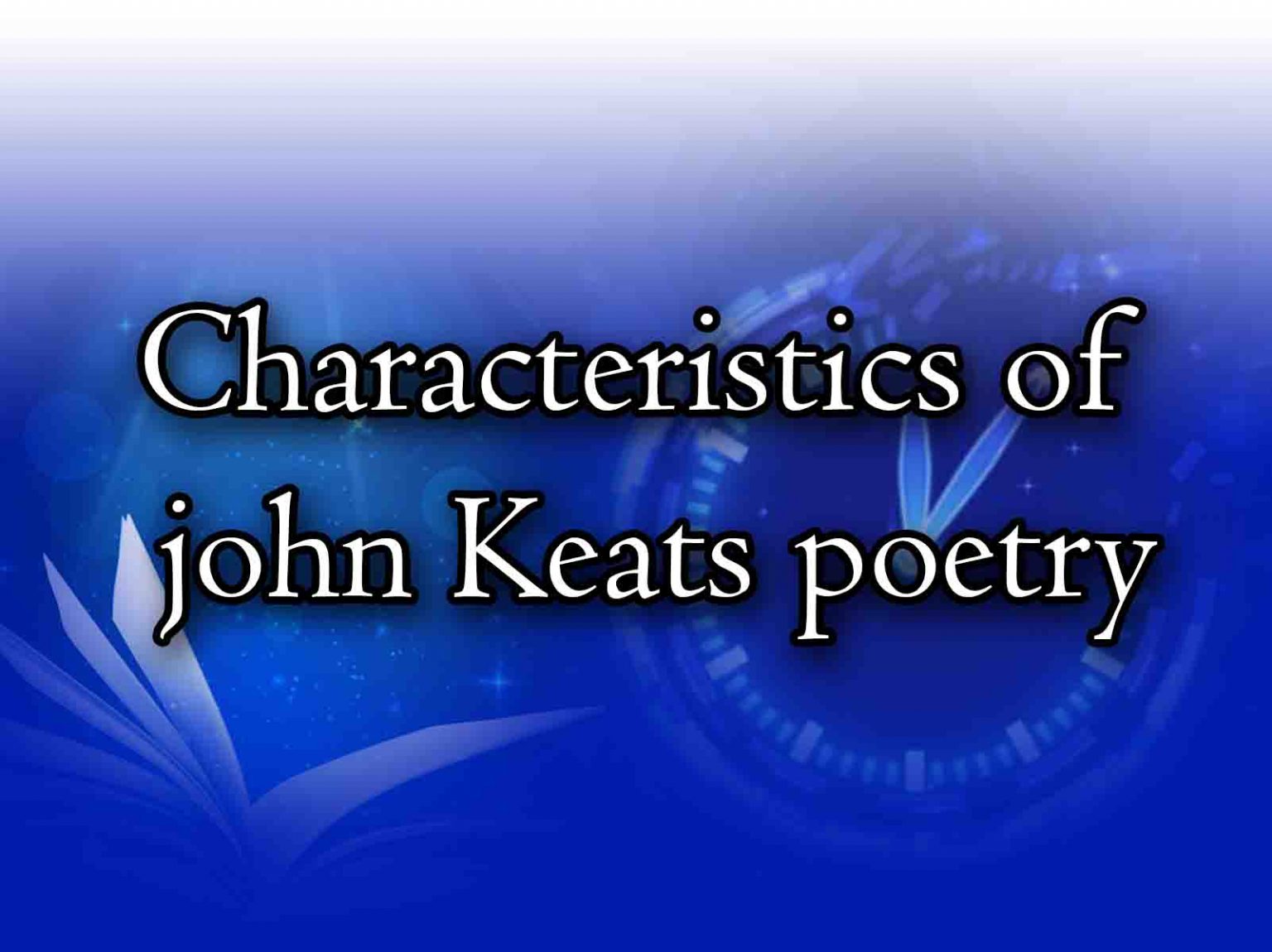 English Romantic lyric poet John Keats (October 31, 1795–February 23, 1821, Rome, Papal States [Italy]) devoted his short life to the perfection of a poetry characterised by vivid imagery, tremendous sensual appeal, and an attempt to use classical mythology to express a philosophy. There are some characteristics of John Keats’ poetry.

Romantic poets have different writing styles. There are several elements in romantic poetry. Whatever element the poet likes best is up to him. Some poets like the natural world, others like to escape, while still others think in supernatural things. In this way, Keats is no different from other poets. He also discusses these romantic poetry fundamentals. Romantic poetry usually has the following elements:

He only writes poetry for artistic purposes. John Keats is regarded as the purest poet in the history of English literature

What is meant by pure poetry? Isn’t it the responsibility of a poet to address societal issues and inform people when they are making mistakes? The basic goal of poetry is not to speak out against issues in society, is the only response to these questions. There may be poets who feel it is their job to address social injustices, but this is not the purpose of poetry; the best and thus most pure poetry is that which offers the senses pleasure.pure poetry is a crucial component of romantic poetry.One of the primary reasons why John Keats is a romantic poet is that he writes poetry purely for the sake of poetry.

Escapism John Keats becomes a Romantic Poet. He has a fantastic imagination, which is a blessing. Since John Keats is the most romantic poet, he is also the most escapist. He enjoys utilizing his imagination to build his own universe when he is unable to deal with the harsh truths of life. In his imagination, he enjoys the company of birds, flowers, landscapes, mountains, and rivers. For instance, in “Ode to Nightingale,” he imagines a world where he might enjoy the sweet, immortal song of the nightingale, which brings harmony and tranquilly to his spirit.

Far far away, and quite forget

What thou amongst the leaves hast never known,

The wariness, the fever, and the fret,

There, where men sit and hear each other groan;

Where youth grows pale and specter-thin an dies,

Where but to think if to be full of sorrows,

He believes that the only way to escape the brutal world around us is through escapism. He seeks to demonstrate through his poetry that escapism is the only option because life’s sufferings cannot be sustained. While the world is dark and barren , while imagination is colorful. In his mind, he is indifferent with life’s troubles and is able to accomplish everything, including things that are impractical in the real world. The main component of love poetry is escapism. John Keats is the best romantic poet since it is present in his poetry.

John Keats viewed beauty as his religion. He can discover it in creatures such as birds, clouds, paintings, forests, flowers, and even Greek mythology. He has a deep love for aesthetics. His readers’ senses are immediately affected by his poetry. He believed that beauty never disappears and always influences all five senses. He fills his poems with sensual beauty even in the midst of worries, pains, sufferings, and disappointments. For instance, Keats mentions beauty in “Hyperion,” a sorrowful and depressed poem, when he says,

“A thing of beauty is a joy forever”

Keats’ imagination increases the value of beauty and takes him beyond the realm of the senses. He speaks about those things, things he has never personally known.

“Heard melodies are sweet, but those unheard are sweeter“

in one of his poems. When he writes,

“Beauty is truth and truth beauty, -that is all Ye know on earth, and all ye need to know,” he further states that beauty is a truth. Thus, he is without a doubt a great lover of beauty and takes advantage of any chance to praise it. John Keats’ pursuit of beauty also sets him apart from competitor romantic poets.

Another key component of his poetry is love for the past. He is interested in the myths of the ancient Greeks. Many other poets of his time admired him much for his love of the Greek people. He explores the spirits and culture of the Greeks in many of his works. Shelly saw John Keats’ love for Greeks and remarked, “Keats was a Greek.” He reads Greek classics, which makes him more interested in their way of life. Additionally, he loves their art.

He showed his love for the Greeks in the poem “Ode to Grecian Urn.” In this poem, he contrasts mortality and art. He refers to mankind as mortal and art as immortal. He claims that while people will eventually fade and become pale, art will endure forever. Keats has something to say regarding the urn’s images, which were sculpted by a Greek artist. He perceived in it the peaceful “grandeur” of Greek art, as well as its elegance, simplicity, and lastly sense of proportion, or the way that the parts are subordinate to the whole. His poetry is filled with beauty because he is a crazy for it.

Keats also appreciates the natural world and its components. He transforms ordinary things into works of art. When something leaves John Keats’ eyes, it changes from being ordinary to extraordinary. His ability to create words out of natural phenomena is astounding. He does not, however, exaggerate them like S.T. Coleridge does.

Additionally, John Keats’ writing has a rhythm to it. Romanticism is revived in musical writing, which also tickles readers’ curiosity.

Future romantic authors can learn from John Keats’ poetry. He disregarded classical thinking and favoured romanticism. When other poets at the time were discussing the French Revolution and other societal matters, Keats committed himself to writing poetry mainly for personal enjoyment.

The idea of negative capability puts more value on intuition and uncertainty than on knowledge and reason. Poets and philosophers have used the phrase to refer to the capacity to perceive and recognize realities that lie outside the realm of logical reasoning.

“Beauty is truth, truth beauty,” he writes in his “Ode on a Grecian Urn”—”that is all / You know on earth, and all ye need to know.”

Keats’ concept of negative capability has influenced many working in fields other than aesthetics, including academics like Roberto Unger who used the concept and modified it for his own work on social theory.

The special characteristic of Keats’ lyrical creativity is sensuality. He used the five senses that humans have: touch, taste, smell, sight, and hearing. He is the poet of Sense and sensual Joy. He also appreciates beauty greatly. With this quote, “A thing of Beauty is joy forever,” he combined love and beauty in a way that became universal.

A number of sensual images can be found in He Ode on a Grecian Urn, including passionate men and gods chasing hesitant maidens, flute players playing their euphoric music, the fair youth attempting to kiss his lover, the joyful tree branches taking in an endless spring, etc. The following sentences brilliantly capture the exhilaration of youth and the passion of love:

warm and still to be enjoyed,

For ever panting, and for ever young

James Joyce’s Use of Ellipsis in “The Sisters”