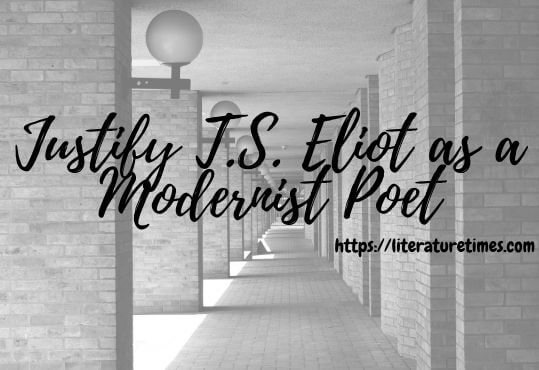 T.S Eliot is likely one of the most vital modernist poets. The content of his poem and his poetic style give elements of the modern movement that was well-known throughout his time. Modernism, “a rejection of traditional 19th-century norms, whereby artists, architects, poets, and thinkers either altered or abandoned earlier conventions in an attempt to re-envision a society in flux.”

Modernism was also mainly represented by orientation in fragmentation, free verse, contradictory allusions, and several views from Victorian and Romantic writing. These modern features seem considerably within the works of Eliot. Two of the most well-known poems where Eliot exhibits his modern orientations are “The Love Song of J. Alfred Prufrock” and “The Waste Land.”

Modernist Elements in “The Love Song of J. Alfred Prufrock”

“The Love Song of J. Alfred Prufrock” is considered one of the significant modernist poems. It exhibits the modern elements of disintegration of life and psychological stability. The poem speaks about the problem of the modern man, Prufrock. He laments his physical and mental shortcomings, the lack of opportunities in his life, along with the lack of spiritual progress. What is impressive is that the poem’s setting appears to be both an actual place or a psychological state reflecting the individual’s unconscious.

The most fundamental modernist approach within the poem is the stream-of-consciousness approach. This approach reflects the fragmentary nature of the modern man’s mentality. It additionally allows the reader to discover the internal self of the character. As seen within the poem, Prufrock’s thought shifts fairly often from trivial to significant points and vice versa. This explains subjective time in modernism, which contradicts the historical time of past, present, and future.

Read About: What is the Importance of T.S. Eliot as a Critic?

As modernism stresses pessimism and loneliness, the negative points of modern life are additionally emphasized within the poem. Prufrock appears to be only capable of seeing these negative points. Death can also be dominant within the poem displaying Prufrock as an insect pinned towards the wall. It is even personified as ‘the eternal Footman.’ What is essential is that Prufrock is the representative of all modern men. He is indecisive. He can’t even decide about eating a peach. It is in this sense that the poem appears to be a record of the random ideas within the thoughts of Prufrock.

Finally, modernist writers had been fascinated by displaying characters having several personalities. This is evident in Prufrock, who functions as the speaker and the listener. In addition, modernist texts are full of allusions to different texts. The poem is much reference to Dante, Shakespeare, and the Holy Bible.

Although Eliot is an impressive modernist poet, some critics argued that he uses some conventional medieval techniques in his works. Those critics argued that “While T. S. Eliot might be called a medieval modernist . Because of his admiration for the organic and spiritual community of the Middle Ages together with his “impersonal” conception of art, his elitist and formalist views isolate him from several of the central terms of the tradition. That is why some critics called him a “medieval modernist.”

Modernist Elements in “The Waste Land”

This is clear in “The Waste Land,” where Eliot shows his discomfort for modern life by contrasting it with medieval traits. He leads the difference between the divinely religious medieval life, which modern life lacks, and the fall in spiritual matters in contemporary life. In fact, “The Waste Land” can be considered as a fundamental modernist text.

The central modernist element found in the poem is the explicit reliance on images, which is a fundamental characteristic of modern texts. The poem shows many fragmented images that reflect the feeling of loss in contemporary man. Although the reader understands nothing of these images, the narrator promises to deliver the reader how to make meaning from fragmentation.

The poem clearly describes the modern world, or what the narrator terms as “the immense panorama of futility and anarchy, modern history.” The frequent images of falling and decay are representative of modern life.

The fragmented images, the stream-of-consciousness, and all the other strange stylistic features in the poem are in a way help convey the message of the poet. For Eliot, modern life is fragmented and illogical, so he says this through his style. That is why in “The Waste Land,” he tends to break the logic and conventions.

To conclude, both The Love Song of J. Alfred Prufrock” and “The Waste Land” are thought of essential texts representing modern thought. In more particular terms, they’re examples of modernist poetry. The poems’ content and style replicate modern life, particularly their effect on the person. Eliot is skillful in exhibiting this by way of his style in both poems. He makes use of stream-of-consciousness to deliver the chaos in modern man’s thinking. That is why one can say that Eliot is likely one of the most influential modernist poets in English literature.

Thematic and Stylistic Analysis of “The Library of Babel”

Chief Characteristics of The Age of Dryden