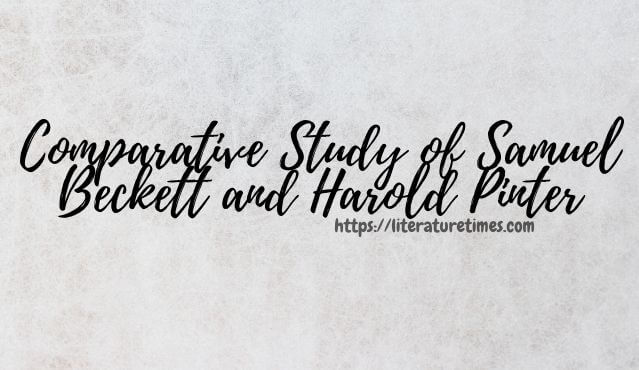 Pinter belongs to the post-war generation of the playwrights, that have rejected the established dramatic values and believed in presenting a new outlook on the society. The following schools of drama were popular at that time:

Read About: What is Theater of the Absurd?

The Absurd drama gives more importance to the situation than to the character. The ultimate end of the playwrights of this group is not to tell a story in the usual sense, but to present a situation in its complexity. Thus lack of plot or story is one of the characteristics of this theatre. The absurd playwrights believed that life is chaotic, full of perplexity and absurdity and it has no set pattern.

The absurdity is presented through setting, dialogue and situation. Following are some features of absurd play:

The plays of Samuel Beckett brought a big change in the field of drama. He expressed ‘the despair of modern man’ in his first play Waiting for Godot. It introduced limited number of characters who ‘wait’. Beckett’s plays are generally related to “tramps, dustbins and prolonged inactivity.

Most of his plays are pessimistic and they take one nowhere as nothing happens in them. But the plays are experimental in nature and remarkable for the economy of language and scenery. Beckett influenced many young playwrights of the period and Pinter was one of them.

Following are the features common to both playwrights, Beckett and Pinter:

It is the use of language pattern, Beckett’s language is not an elaborate expression of man’s hidden thoughts. It is not emotional, nor does it have catchy phrases. He believes that the world is meaningless and, as a result, language is also a meaningless sound. Beckett reaches to a point where he can do without words. This failure of language is presented by Beckett in a variety of ways.

Taking examples from Waiting for Godot:

“Estragon Can you not stay still ?

Estragon We came too early.

Uses of repetition in “Waiting for Godot”

“Estragon : I am happy

Vladimir: So am I.

Estragon: So am I.

Vladimir: We are happy.

Estragon: We are happy”.

Use of repitition in ‘The Dumb Waiter”

Ben: He won’t know you’re there.

Gus: He won’t know you were there.”

Use of silences and pauses

Beckett uses silence and pauses skillfully for dramatic purpose. It is the “failure of language” which fascinates Beckett and Pinter. Beckett uses pauses for various purposes:

To show uncertainty in Waiting for Godot:

“Vladimir : Yes, you do know them.

Vladimir : We know them, I tell you, you forget everything. (Pause) To himself unless they’re not the same”

Beckett uses silence in his plays as he believes that words cannot express everything and silence is a better way of expression than words. He uses silence to express hesitation, meaninglessness of communication, a dead end to an incident or relationship.

Pinter also believes in the failure of words and he makes use of pause and silence in his plays. He uses pause to create the background of some crime, menace, shock, fear. Occasionally, it is a pre-pause to a false reply. It presents conflict in the thought or some break in thought process.

Pause becomes an integral part of Pinteresque discourse, serving a variety of purposes:

In Beckett’s plays pauses are used mainly to express confusion, doubt and hesitation.

Some symbols and dramatic situations are common in their work. For example, two tramps wait for something unknown in Godot. Similar situation is present in The Dumb Waiter. Ben and Gus wait for someone; whose identity is unknown to them. They are not certain about time, place and action just like Vladimir and Estragon of ‘Godot’.

The symbol of shoes is used by the playwrights for different purposes. In ‘Godot’ Vladimir establishes shoes as a metaphysical symbol. Pinter uses this symbol in The Caretaker as a sign of identify.

View for life/Attitude towards life

Beckett’s plays present a bleak view of life. His is the world of utter hopelessness. It is purposeless and absurd. It has no meaning. Pinter’s plays, too, present the bleak outlook towards life. Life is uncompromising and unpleasant. The major difference here is that Pinter’s world is not purposeless and absurd. His people act with motives and many times they succeed in achieving them.

Their characters are confused. They have short memory and they easily forget the past. It happens with Estragon and Vladimir and it also happens with Rose, Stanley and Davies.

The people of both the playwrights represent common men, but Pinter’s people belong to our world and they are nearer to us.

Considering the difference between these two playwrights: