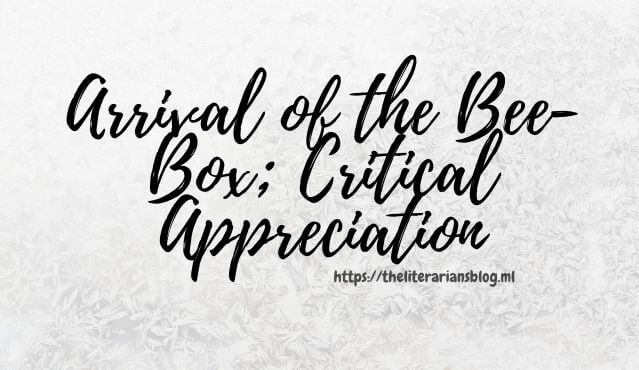 The Arrival of the Bee-Box is a poem by Sylvia Plath, one of the most prominent American Poetess of 20th century. The poem shares split personality and fears of complexity, insecurity and public exposed. The tone of poem is dreamy and depressing. The setting is essentially speaker’s mind. Poem has theme of Power, catharsis, depressed emotions and insecurity. The speaker in this poem is first person. The  poem is written in free verse, consist of 36 lines broken into five line stanzas, quintains.

The wooden bee-box has arrived. It is square and heavy, reminds me of a small coffin for square shaped person. Because the bee-box is locked so it is hard to see what is inside as there is no window, just a small eye-hatch. it is so dark in there. It seems like it is full of the hands of African slaves on slave ship, angrily pushing each other and fighting for space. It sounds like angry crowd in ancient Rome – harmless individuals, but in a group.

The truth is, I have bought a box full of total crazies. They had ignored me while I was dressed in my protective bee-keeping suit, with its funeral-veil-like head covering. Tomorrow I promise to be a good master and let them go.

Themes in “Arrival of the Bee-Box”:

The power dynamics between the speaker and the bees are clear. It is the speaker who “ordered” the box. The box is passive object and whatever is contained within cannot get out without speaker’s deliberate action. The speaker, then, would appear to hold all the power in this situation.

“I ordered this, clean wooden box.”

“I have to live with it overnight.”

The realization that speaker had, awareness of her responsibilities knowing that she’s been cast as kind of god that has control over whether the bees live or die. The seems frightening for speaker “The box” is “locked” and “dangerous” yet she “can’t keep it away from it.”

“There is only a little grid, no exit.”

She has to kill her desires but have to stay here also.

These line shows her lack of confidence and her insecurity. How could I possibly set them free?

The noise is the thing that frightened her the most, sounding as it does like some non-sense language.

It sounds like angry crowd in ancient Rome – harmless individually but in a group yikes!

Though “The Arrival of the Bee Box” makes sense on a literal level, it’s often interpreted along more metaphorical lines too. Given Plath’s struggles with mental illness and eventual death by suicide, some critics read the box as a symbol for psychological stress and anguish—the kind of manic and depressive thoughts that can get the better of people.

Generally speaking, the box thus represents a kind of claustrophobia that reflects the speaker’s state of mind. Indeed, she projects a number of feelings onto the box, feelings which stem from stress and pain and which she seems to want to keep shut tightly away. The strange image of a “square baby” in the first stanza might signal anxiety of motherhood. Later, the third stanza—which likens the bees to African slaves—speaks to aggression and the feeling of being held captive. The “Roman mob” of the following two stanzas seems to suggest both anger and an anxiety about being misunderstood by the surrounding world (“unintelligible syllables”).

It’s also worth noting that some critics view the box as a symbol of creativity—and the difficulties of harnessing it; in this reading, the speaker asserts that she has absolute power over these creative impulses, but towards the end of the poem it seems like she is only trying to convince herself of this. Both readings, ultimately, thus relate to the difficulty of taking control over one’s own life and mind.

Symbolism in “Arrival of the Bee-Box”:

There’s really only one object in “The Arrival of the Bee Box”—the box itself. In fact, the whole poem revolves around the speaker’s thoughts about the box. Symbolically speaking, the box is an ambiguous presence, and intentionally so. On a literal level, it’s just a box filled with bees. But the way the speaker thinks about makes the box seem like a container for more than that. Indeed, the speaker projects her own anxieties and fears about life onto the box, associating it with a whole world of negative emotions (like anger). In this sense, then, the box can be read as a representation of the human mind—and its capacity for fear, suspicion, and worry.

“I ordered this, clean wood box

Square as a chair and almost too heavy to lift.

I would say it was the coffin of a midget

Or a square baby

Were there not such a din in it.”

“Moon suit and funeral veil” is the way that Plath chooses to describe the typical protective suit that people were when handling bees. It’s a humorous description with some subtle symbolic ideas behind it. First of all, the “moon suit” is in image taken, of course, from space travel. This relates to the extra-terrestrial, the idea of being alien—something which the speaker feels in relation to the bee box and its contents. The suit, then, suggests the unbridgeable gap between the speaker and the bees—their inability to communicate or understand one another.

The funeral veil specifically refers to the mesh covering that the bee-keeper wears over the face. It is indeed veil-like in appearance, and the association between these two items of clothing is telling with regard to the speaker’s state of mind. Indeed, the reader already knows that she has death on her mind from the mention of a coffin in line 3. The funeral veil—with its symbolic implication of death—thus links the ending of the poem with its beginning, demonstrating death to be a subtle but consistent presence in the speaker’s mind.

“In my moon suit and funeral veil.”

Poetic Devices in “Arrival of the Bee-Box”:

The repetition of first letters. “Black on Black”.

The “b” sound here shows alliteration.

When one line runs on into the next with no punctuation, carrying the sense on and causing a gain in momentum. As in the following lines;

“I would say it was the coffin of midget”

“Or a square baby”

Substituting one thing for another to deepen the meaning,

“The bee-box” itself is a metaphor for repressed emotional and poetic content.

When two things are compared, as in reference to the noise in the box.

She compares her feelings with African wild, uncivilized.

“The Arrival of the Bee-Box” is one of the most important poem by Sylvia Plath. Poem shares her split personality and portrays the conflict of girlhood and womanhood. She wrote right before her suicide.