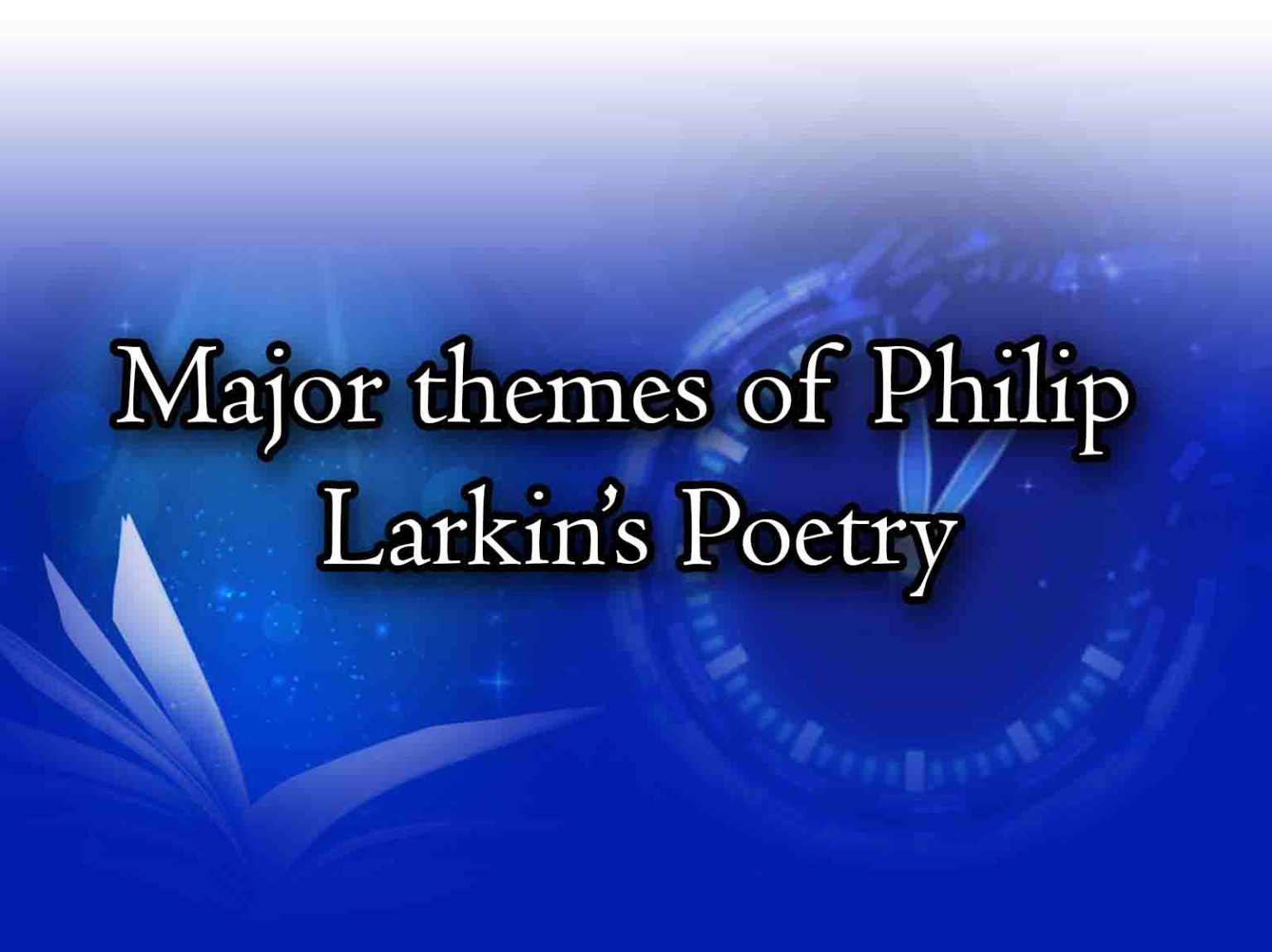 The movement poetry stands for a group of poets who rebelled against the exaggeration of romanticism of 1930s and 1940s. The Movement poets wrote a poetry that was clear,simple, more well-structured and easy in style and subject matter.

Philip Larkin‘s poetry has a variety of themes: such as religion , death , Nihilism, pessimism, loneliness and alienation realism and etc. All these themes can be seen in Larkin’s poems such as Church Going, Ambulances, and Mr. Bleaney.

Religion is the most prominent and theme of his poetry. Larkin has written his all poems in the context of his personal beliefs about life, religion, and religious doctrine. He explores his ideas about God, religion and the existential script of religious beliefs of contrary classes of society in his poems, ‘Church Going’ realistically. His poem ‘Church Going’ is about of that time, when people had become suspicious of the existence of God and religion. Larkin’s satire is seen from the very first line of the poem:

“Once I am sure there’s nothing going on.

The representation of the church refers to anyone who visited in a church. The speaker is not a religious person, and he takes a dismissive, even disdainful (Disrespectful), attitude toward religious belief. He sees religion as something quickly becoming old—something “going,” as the title says. Religious belief is going away, disappearing into the past.

Death is the dominant theme of Larkin’s his poetry. His ideas are always dealt with the concept of death. His poem “Ambulances “represents death. He portrays that the busy procedure of urban neighborhood that is disturbed by the abrupt emergence of an ambulance.

Philip explores the theme of Death in his all poems. That’s why he is called a grave yard poet. Ambulance travelling in the whole city and on the roads. This is actually about death moving in to the city. The journey in an ambulance can be compared to the last journey towards final destination where one departs alone the life, the relationships and all the life styles are left behind. Philip said that the death of a man is not just a loss of life but it is a loss of life time.

It is not just one person that dies but a whole pattern of life style, of relationships and a example of existence that is lost. All streets in time are visited .On one hand by delivering the theme of death he tells us about eternal peace that man will enjoy after death.

“They years,the unique random blend of families and fashions,there;

“The solving emptiness / That lies just under all we do.”

The view of the graves makes a man sane, therefore every grave refresh someone’s memory of death. It is Ambulances that provides us with the straightforward picture of human mortality with its vivid representation of ailment and death.

His poem, “Church Going “shows Nihilism which means ”a philosophical doctrine that deals with  the lack of belief in one or more meaningful aspects of life” and Pessimism which means, an attitude of hopelessness of life and the existence”. Andrew Motion states that:

“Larkin has often been regarded as a hopeless, inflexible pessimist”

Church Going deals with contemporary agnosticism. The narrator in this poem is very skeptical about churches.Though the ‘Church’ is the symbol of faith, peace and purity yet in the modern age people have lost faith in Church. He says:

“Who will be the last, the very / Last to seek this place for what It was.”

And further he says that:

“Shall we avoid them as unlucky places?”

As for as the nihilism is concerned, Larkin talks about the negation of life and shows his disgust (hater)with the modern civilization.

Larkin’s perspective in his poem “Ambulances” is pessimistic with an atmosphere of disaster. The poem describes the hollowness and nothingness of common modern man who don’t have time to show love and sympathy for a any sick man as Larkin says:

“And sense the solving emptiness / That lays just under all we do.”

That modern man is devoid(emptiness) of sympathy, he only pays lip service for the sick man, but no practical solution.

Loneliness and Alienation deals with “a sense of not belonging, either to a community or to one’s own sense of self” are also main themes of Philip. His poem “Mr Bleaney” is about the unhappy modern man and its pleasures. MR. Bleaney was living in submissive poverty because of financial and economic pressures. The poet criticizes at the modern civilization which is going to dogs. It is full of turmoil and there is no hope for improvement in the life of a ordinary man.

Realism is also a dominant theme in LARKIN‘s poetry. In Church Going, he represents the breakdown of religion and church as a foundation. Therefore people were losing their faith in Church and Christianity. Church has failed to prove its value in the modern society. In “Mr Bleaney”, Larkin has elaborated the life of an common modern man. Mr Bleaney is actually a post-war person who doesn’t realize the importance of time. He feels that the room is dirty and there is no any room for all books. It also contains autobiographical elements.

“Ambulances” is also a realistic depiction of modern society, it represents the picture of the world war ii where people were sick and dying every day.

In this assignment I have discussed Philip Larkin‘s poetry’s themes: such as religion , death , Nihilism, pessimism, loneliness and alienation, realism and etc. All these themes can be seen in Larkin’s poems such as Church Going, Ambulances, and  Mr. Bleaney.

In the end, one can say that LARKIN, being a modern poet, has taken up the themes such as religion , death , Nihilism, pessimism, loneliness and alienation, realism and etc. All these things were necessary because of the conditions of Post War England and also his treatment of these themes is very unique, realistic and convincing.

Man vs Nature in Hawk Roosting by Ted Hughes