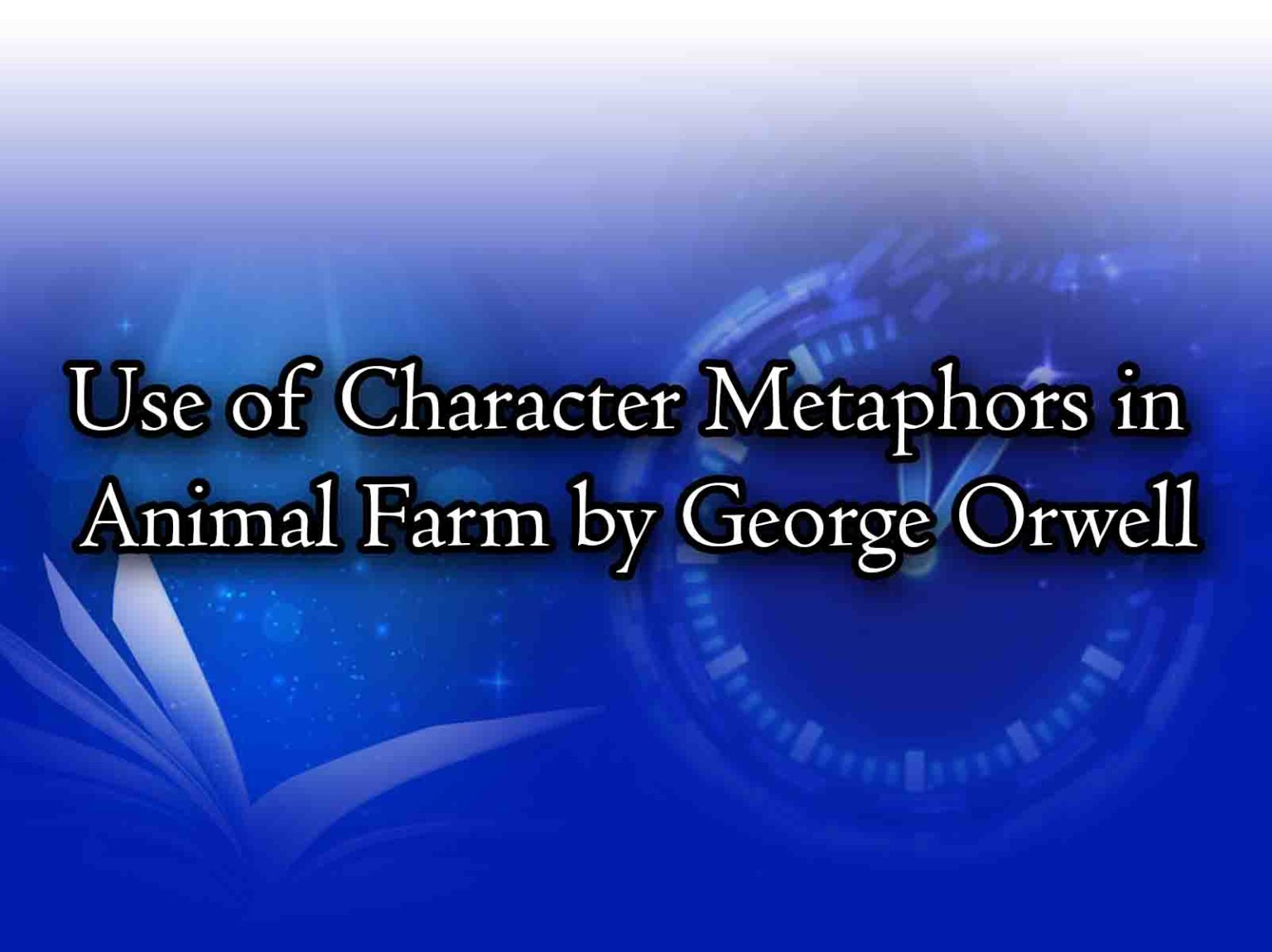 George Orwell wrote Animal Farm in 1944 as a way to criticise the Soviet Union’s leadership and bureaucracy, which he compared to animals.

Eric Arthur Blair’s pen name, George Orwell, was a British novelist, essayist, and critic. He was born in India between the years 1903 and 1950 and grew up in a wartime and military environment. From 1922 to 1927, he was a member of the Indian Imperial Police. This changed him into a political and literary rebel.

Animal Farm (Orwell, 1999), originally released in 1944, is one of Orwell’s most popular works. The 1917 Russian Revolution influenced his writing of the novel.

In this work, he tacitly criticises Stalin’s method of government by comparing it to that of farm animals. Since they were made by the author to be like Soviet Union officials, the characters in Animal Farm who come to life under the leadership of Jones and the way the animals are ruled were important to him.

The Background of George Orwell’s Writing of Animal Farm

George Orwell was one of several British novelists of the early 20th century. Living throughout wartime, he had numerous difficult life experiences, some of which were later documented in his books and essays. He stated he was a writer for political reasons (Orwell, 2014). He only wrote when he needed to uncover lies and reveal concealed information. Animal Farm, his most renowned work, is a satirical fable that criticises the USSR’s governance system. Although he had never visited the Soviet Union, he was aware of the situation there at the time; he was aware that the Soviet government employed iron policy and covert police operations to keep its citizens compliant with the country’s system. All of these events prompted Orwell to write Animal Farm, which was published for the first time in May 1944.

The author developed the characters in Animal Farm as metaphors for Soviet Union officials at the turn of the 20th century. The author discovered similarities between the characters of the government’s leaders at the time and the following animals, based on an investigation of the story’s characters.

Read About: The Poetic Achievements of S.T. Coleridge

Jones, the proprietor of Manor Farm, was described by Orwell as a brutal master who imposed autocracy on his animals. He forced them to work hard in the fields, allowed them to live in squalor, and seized whatever they produced. In exchange, Jones provided them with only enough food to prevent them from starving. Jones resided in a nice and cozy farmhouse and enjoyed the animals’ produce while living in prosperity. The animals were handled as slaves with Jones’s consent.

“Man is the only creature that consumes without producing. He does not give milk, does not lay eggs, he is too weak to pull the plough, he cannot run fast enough to catch rabbits. Yet, he is lord of all the animals. He set them to work, he gives back to them the bare minimum that will prevent them from starving and the rest keeps for himself. Our labor till the soil, our dung fertilizes it and yet there is not one of us that owns more than his bare skin”.

On the Manor Farm, Old Major is portrayed as a wise old boar who is highly esteemed. The Old Major gathered his colleagues one night to hear his speech, which inspired the animals to prepare for one day waging a revolution against Jones and his troops in response to the animals’ deplorable plight.

Old Major and his speech resemble Karl Marx’s communist manifesto, which stated that communism would replace and eradicate capitalism.

Napoleon to Trotsky and Snowball to Stalin

After the revolution that succeeded in evicting Jones from the farm, Snowball and Napoleon, two juvenile pigs, commanded the animals without any votes. Snowball was described as not only intelligent but also articulate and literate. In contrast, Napoleon was seen as a power-hungry pig who was not a great public speaker. Napoleon and Snowball’s friendship did not survive very long since they began to argue at every Sunday gathering. Until one day, Snowball’s proposal to construct a windmill was up for a vote.

As usual, Napoleon opposed Snowball’s viewpoint. Then, they each presented their arguments for the construction of the windmill. Snowball’s ability to persuade his teammates to vote for him was facilitated by the fact that he was an exceptional orator. Napoleon, who based his dominance on political strength, realized the situation and emitted a peculiar sound that sent nine enormous dogs to rush after Snowball, ready to attack and kill him. Snowball grasped the situation quickly and chose to flee the property.

Napoleon and Snowball’s conflict was an obvious allegory for Stalin and Trotsky’s conflict. They were both leaders of the Bolshevik Party. After Lenin’s death, they began to vie for his position as party head and president of the Soviet Union. Stalin emerged victorious over his intraparty competitors at the conclusion of the contest. Stalin’s win was not due to his capacity to rule Russia, but rather to his skill as a political manipulator, who used Pravda, the official party newspaper, to urge the people to vote for him as their future leader.

After Stalin became the leader of Russia, he deported Trotsky to Siberia, while individuals suspected of supporting Trotsky were imprisoned, expelled, or even murdered by Stalin’s operatives. Occasionally, after Snowball was ejected from the Animal Farm, a massacre of animals occurred because they were suspected of supporting Snowball.

Read About: Critical Analysis of the Poem King Fisher by Daud Kamal

Squealer to Pravda and Boxer to Proletariat

Squealer is a wick, but a smart talker pig who Napoleon employed to convince his companions that Napoleon’s policies were developed for the benefit of the farm. Napoleon, a wicked leader, utilised Boxer as a paradigm of the proletariat to persuade other proletariats that the policies were for their own benefit.

All of Stalin’s new policies in Russia were originally conceived by Trotsky. As the most widely distributed newspaper in the USSR, Pravda quickly disseminated the new policies without attributing them to Trotsky, leading many to believe they were Stalin’s original concepts. Since television and radio did not exist at the time, newspapers were the only source of information used by the government as propaganda to support the actions of its leaders. Since the proletariat, or unskilled working class, was the majority class in the Soviet Union and was often of the lowest IQ, the task was not particularly difficult. It was not difficult to persuade them that they had gotten a good deal through newspaper coverage.

In 1929, a worldwide downturn was occurring. At that time, countries were compelled to engage in international trade in order to meet their needs. The Soviet Union was also involved in commerce. One of them traded unfairly and falsely with the Germans. Orwell portrayed the circumstances of the period in Animal Farm by introducing Frederick, a wick human character, as a metaphor for a German interested in trading with Napoleon and the timber issue. Napoleon sold timber to Frederick, who gave him a blank note in exchange. Conflicts arose between them due to the unfair trading. Thus, it is evident that the parallel is evident.

A character in prose fiction is the author’s invention of a fictional person as he or she sees fit. Frequently, the mannerisms, habits, and attitudes of fictional characters are imitations of those of actual people in everyday life. In Animal Farm, George Orwell vividly describes the personalities of Soviet Union leaders at the beginning of the 20th century by comparing them to the characters in Animal Farm.

How to Answer: “Tell Me About Yourself” – Interview Skills

Kahlil Gibran and his Parables