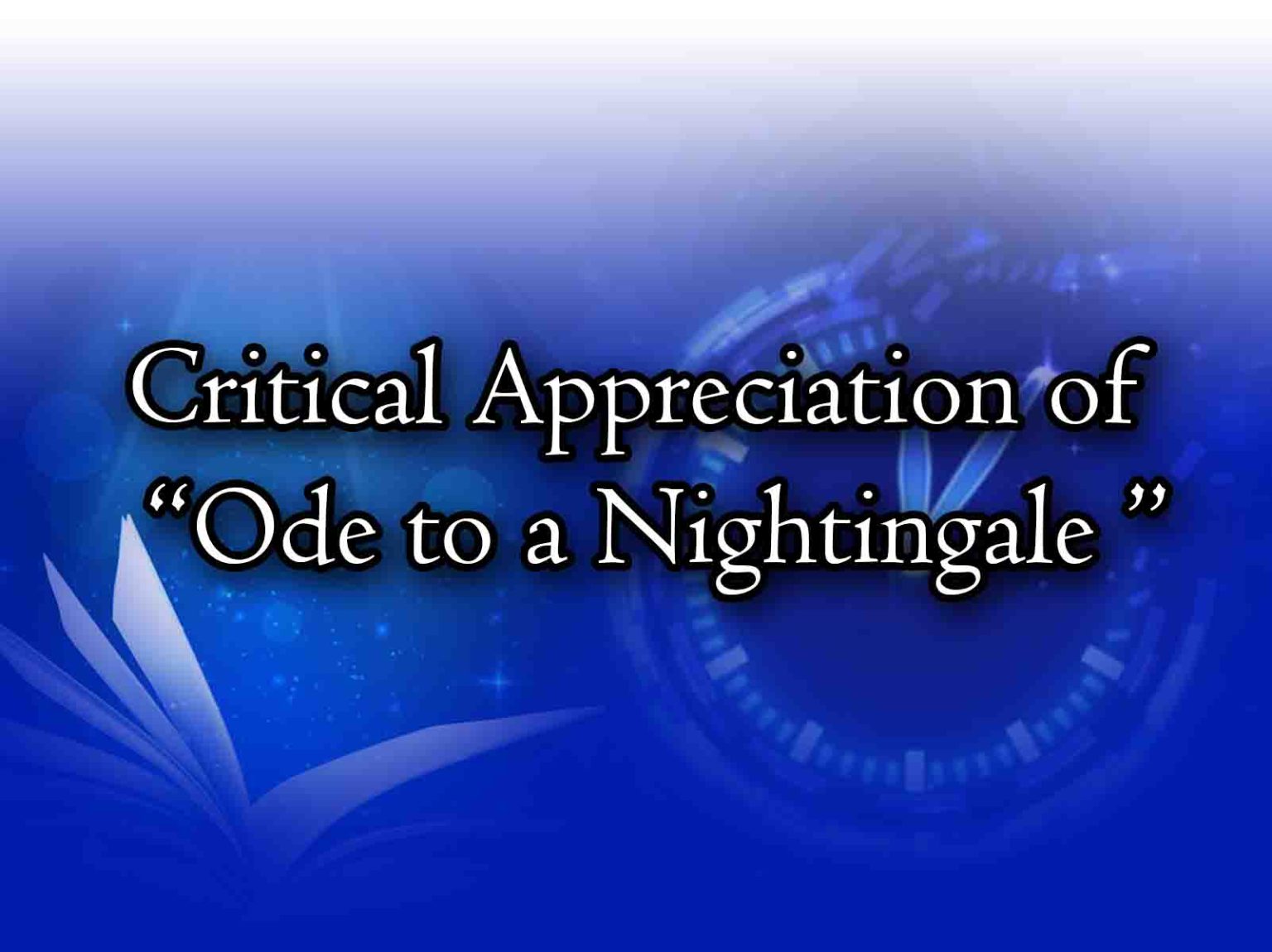 The renowned romantic poet John Keats wrote “Ode to a Nightingale,” which is regarded as one of the best odes in English literature. According to Keats’ friend Charles Armitage Brown, it was either written in the garden of the Spaniards Inn in Homestead, London, or in the garden of his home at Went-worth Place, also in Homestead, under a plum tree. In the complex lyrical poetry “Ode to a Nightingale,” the poet finds comfort from the trials of life by escaping to the imaginary world of a nightingale. The poet’s lofty feelings on the fleeting nature of reality are expressed in the poem.

Keats is experiencing uncomfortable sleepiness or drowsiness. His state is not caused by envy of the nightingale’s imagined happiness; rather, it is a response to the enjoyment he has already felt as a result of engaging in the nightingale’s happiness. The song of the bird expresses its joy.

Keats yearns for a drink of wine to help him escape his own existence and merge it with the life of the bird. He would become aware that life is full of suffering, that the young die, the elderly suffer, and that merely contemplating existence produces sadness and misery after drinking the wine, and he would no longer be himself.

Wine is not necessary for him to be able to escape, though. He can use his imagination just as effectively. When he recognizes this, even if there is only a light of hope where he is physically, he is lifted up above the trees in spirit and is able to view the moon and the stars. He is unable to see the flowers surrounding him, but he can make an educated assumption based on their smell and what flowers should be in bloom at that moment.

He pays attention to the nightingale in the shadows. Now, in his opinion, it would be a beautiful experience to pass away while the bird is still singing ecstatically, to “end upon the midnight with no pain.”He confesses that he has frequently been “half in love with easeful Death.” The nightingale escapes the inevitable death that confronts humans. He is listening to a nightingale singing that peasants and emperors alike heard in the past. It’s possible that Ruth, whose life is described in the Old Testament, heard it.

In the final stanza, Keats is reminded of who and where he is by the word “forlorn,” which was the last word of the verse before. He is unable to flee, not even with the aid of his thoughts. The bird’s singing fades away and gets progressively fainter. He is unsure if the event he had was a vision because it appears so bizarre and perplexing. He’s not even certain if he’s awake or asleep.

Keats has used rhyme scheme for this ode that is ABABCDECDE that can be seenthroughout the poem.

The poem is set in a forest, both inside and outside

“Whoa, dude, I’m jealous that you get to live in there. How can I get a place like that? “

The speaker says to the nightingale as he glances into the trees from outside at the opening of the poem. He imagines the bird is having a ball in the woodland, much like a partygoer might in the Mediterranean sun.

In the poem, Keats portrays his journey to the level of negative capability. In a letter to his brothers, John Keats introduced the concept of “Negative Capability,” defining it as “that is when man is capable of living in uncertainties, mysteries, doubts, without any impatient grasping for fact and reason.”

The speaker expresses both “happiness” and “pain” in response to the nightingale’s song’s beauty. Although he aspires to totally embody the bird, to

“fade away into the forest gloom,”

he is aware that his own human consciousness keeps him apart from nature and prevents him from experiencing the same type of deathless delight the nightingale does.

John Keats and many other poets in the English Romantic Movement employed escapism in their writings. Escapism is a crucial component of Keats’ poetry; he uses it as a means of seeking escape from unpleasant circumstances and anxieties in the realm of everlasting beauty and nature. In addition to being a component of romanticism, the repetitive escape in his poetry is also largely the outcome of his own sad life experiences. He believes that the nightingale’s dulcet singing is proof of its complete happiness in the world. Seeking refuge in the nightingale’s forest home after failing in love, poetry, and brother’s death.

In this critical Appreciation, Some elements of Keats poetry can be seen, such as structure of poem, setting, his concept of Negative capability, and escapism.

Who is the Hero in Paradise Lost by Milton?