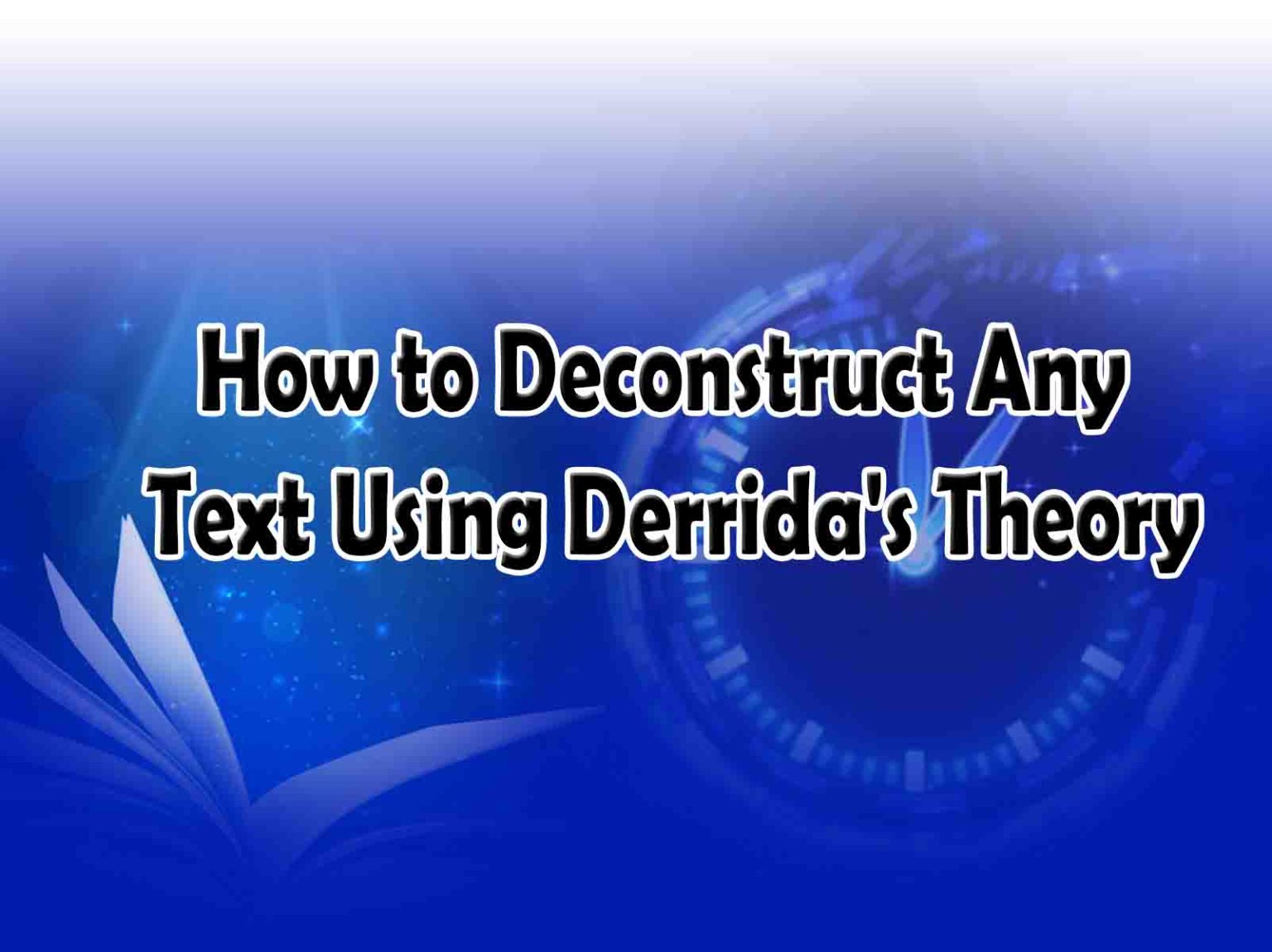 How to Deconstruct Any Text Using Derrida’s Theory

Derrida’s deconstruction theory, sometimes called simply “deconstruction,” refers to the process of analyzing a text’s meaning by breaking it down into its constituent parts to gain an understanding of the ways in which it relies on or subverts its own structure.

Derrida’s theory of deconstructionism can be applied to any written text, whether it’s an essay or the label on a box of cereal. Deconstruction theory works by breaking down an idea into its component parts, looking at how those parts relate to one another, and then applying this knowledge to future ideas that are made of the same elements in different combinations. It’s complicated to explain, but using deconstruction theory can make you into a smarter reader, writer, and thinker overall—so here’s how to do it.

In deconstruction, Derrida attempts to show that any text is not a unified, complete whole, but is instead composed of many smaller parts that are in conflict with one another. This theory can be applied to any text, whether it is a literary work or a legal document. In order to deconstruct a text, one must first identify the binary oppositions within it. These are the pairs of concepts that are in opposition to one another, such as good and evil, male and female, speech and writing. Once these oppositions have been identified, they can be deconstructed by showing how each term relies on the other for its meaning.

Deconstruction is a way of analyzing a text by looking at the ways it can be interpreted. This theory was developed by French philosopher Jacques Derrida, who believed that meaning is never fixed but is always in flux. To deconstruct a text, you need to look at it in terms of the binary oppositions that it relies on. These are pairs of concepts that are used to create meaning, such as good/bad, male/female, or mind/body. By deconstructing a text, you can see how these oppositions create meaning and how they can be broken down.

The Term Derives from the Greek word Catharsis

Catharsis originally meant the act of purifying or cleansing oneself. In literature, katharsis is the moment when the protagonist finally overcomes all obstacles and is able to achieve their goal.

Derrida’s theory of deconstruction is based on the idea that meaning is always deferring, or pushing off, to other meanings. In order to understand a text, we must first understand all the meanings that come before it.

Breaking a Work Down into Parts, Finding Connections and Making Inferences

When deconstructing a text, you’re essentially breaking it down into smaller parts in order to better understand the whole. To do this, you’ll want to look for connections between the different elements of the work. For example, if you’re deconstructing a novel, you might look at how the different characters relate to one another and how they drive the plot forward. Once you’ve identified these connections, you can start to make inferences about the author’s intent and what the work is really saying. If the author wanted to communicate something specific to the reader, he or she would likely have included specific details that support this idea.

For instance, in Hamlet, Shakespeare includes several mentions of Yorick as he tries to convince us that Yorick was just an innocent clown who died prematurely rather than a usurper king who was beheaded by his own son. The more references there are to the central character, the more we should be able to infer from them. Another way that authors try to convey messages through their texts is through symbolism. One well-known symbol from literature is the white whale from Moby Dick – it could represent various things such as life, death, good luck or evil depending on the context in which it appears.

The Significance of Deconstruction in Literature

Deconstruction theory was first proposed by French philosopher Jacques Derrida in the 1960s. The theory has since been applied to a variety of different texts, both literary and non-literary. Deconstruction is a way of reading a text that destabilizes its meaning and exposes the underlying assumptions that prop up the text’s structure. In literature, this can be used to uncover hidden meanings and subvert dominant interpretations.

Role of Center in Deconstruction

In deconstruction, the role of the center is to provide a stable point around which a text can be organized. This can be thought of as the anchor that keeps everything in place. The center can be an image, a word, or even a silence. In fact, anything can serve as the center, as long as it provides a fixed point for the text. Once the center is established, the rest of the text can be deconstructed by looking at how it relates to this central point. For example, if we take the word dog as our center, we can then look at how other words in the text (such as cat, animal, pet, etc.) relate to it.

In deconstruction, a text is analyzed by looking at the assumptions that it makes and the underlying structure that supports those assumptions. By doing this, we can see how the text is put together and what it means. For example, when we deconstruct a sentence, we might find that it is made up of two parts: a subject and a predicate. The subject is the thing or person that the sentence is about, and the predicate is what is said about the subject. By looking at how these two parts are related, we can understand the meaning of the sentence.

Breaking a Work Down into Parts Deconstruction How to Deconstruct Any Text Using Derrida's Theory The Significance of Deconstruction in Literature The Term Derives from the Greek word Catharsis
Share. Facebook Twitter Pinterest LinkedIn Tumblr Email

Analysis of “In the Praise of Limestone” by W.H. Auden