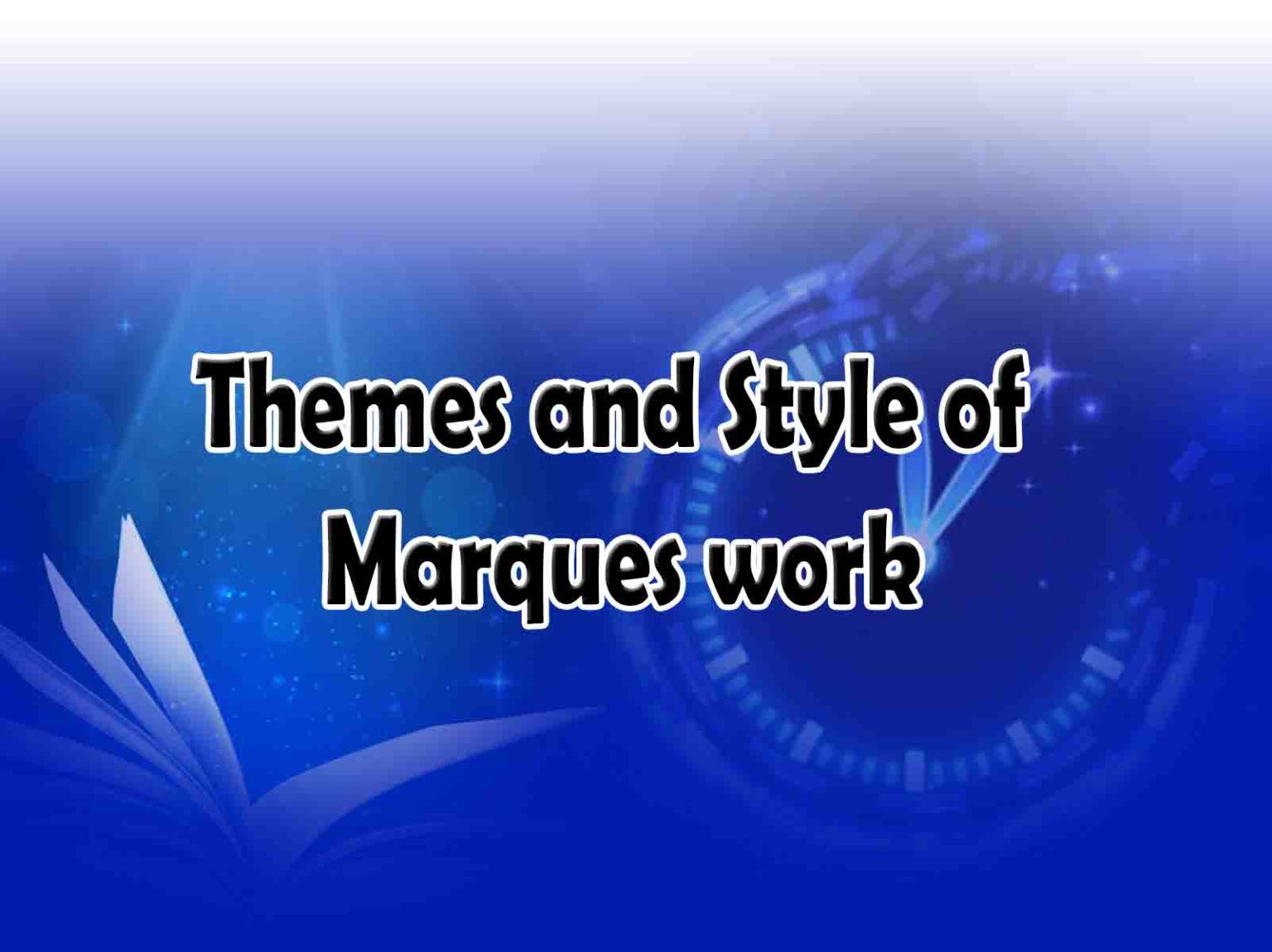 Themes and Style of Marques work

Gabriel Garcia Marques  is considered as a most prominent figure of post modern era. HeGabriel Garcia Marques was born in Colombia in 1927. He was a novelist,s hort story writer , and journalist as well .His most famous work in which include ‘’One hundred years of solitude ‘’ , The Autumn of patriarch ‘’,Love in the name of cholera ‘’ . He has used the theme of fantasy vs reality , man and women relationship ,family ,religion , love war and injustice and stylistically he was famous for literary technique magical realism . The President of Colombia Juan manual called him ‘’ The great Colombian writer who ever lived ‘’. He was died on April2014 in Maxico city.

There are two themes that one can find in most of Marques works first one is ‘’solitude ‘’ and the second is the war and violence that can be seen throught out his works.

The theme of solitude

The theme of solitude can be found through much of marquez works . In one of his work ‘’Love in the times of cholera ‘’ like all of the Marques novels represent the solitude of individual and mankind portrays through the solitude of love and of being love .In response to mandoze question it solitude is the theme of all your books then where should we look for the roots of this over emotion in your childhood Marguez replied I think it’s a problem everybody has his own path and means of expressing it. The felling pervades the work of so many writers although some of them express unconsciously’’.

Violence and War In several of Garcia Marques’s work including ‘’No one writes to the colonel’’, Evil Hour and leaf storm he references the violence ‘’ A brutal civil war between conservative and liberals that lasted into the 1960 causing the death of hundred thousand of Colombians ‘’ .Evil hour is one of the most famous novel that is notable for its portrayal of the violence. He does portray injustice of time. He refuses to use his work as a platform for political agenda. For him the duty of revolutionary writer is to write well.

Apocalypse Another theme of Marquez that can be seen in One Hundred Years of Solitude is the apocalypse and human time. To direct and structure his works, he uses the apocalypse. He is always up forward about the fact that everything has an end. The story in the book centres on the Macondo-based Buendia family (the same town he used in Leaf Storm). The plot establishes a connection between human time and the cosmos’ overall time. He relates the entire story of the Buendia family, their village, and their entire universe . Marquez may be attempting to convey to his audience that, in the larger scheme of things, our lives and the things we hold dear are truly insignificant.

He was famous for magical realism and he used intertextualities.

Magical realism is one of the styles that Marques does use repeatedly. In this type of writing, the author narrates stories of the magical and supernatural in a cool, collected manner. Magical realism can be seen in his story ‘’ The handsomest drowned man’’ a super human presented realistically and his most famous novel ‘’One hundred years of solitude’ ’In this novel ‘’ There is a child born with pig’s tail’’. A child with a tail something like magical which

Intertextuality is a literary technique in which an author uses references back to other work of fiction or historical event. Author used intertextuality to provide a skeleton for an event or character to clear it up fot the reader. He uses this technique in his novel ‘’ Autumn of the patriarch ‘’. He uses three characters for reference.

Suspense is another technique that Marquez employs to help his works move. Modern entertainment is increasingly favouring suspense, which has even become a distinct cinematic genre. Marquez used suspense as a literary device to captivate readers and keep them turning pages.

How to Deconstruct Any Text Using Derrida’s Theory