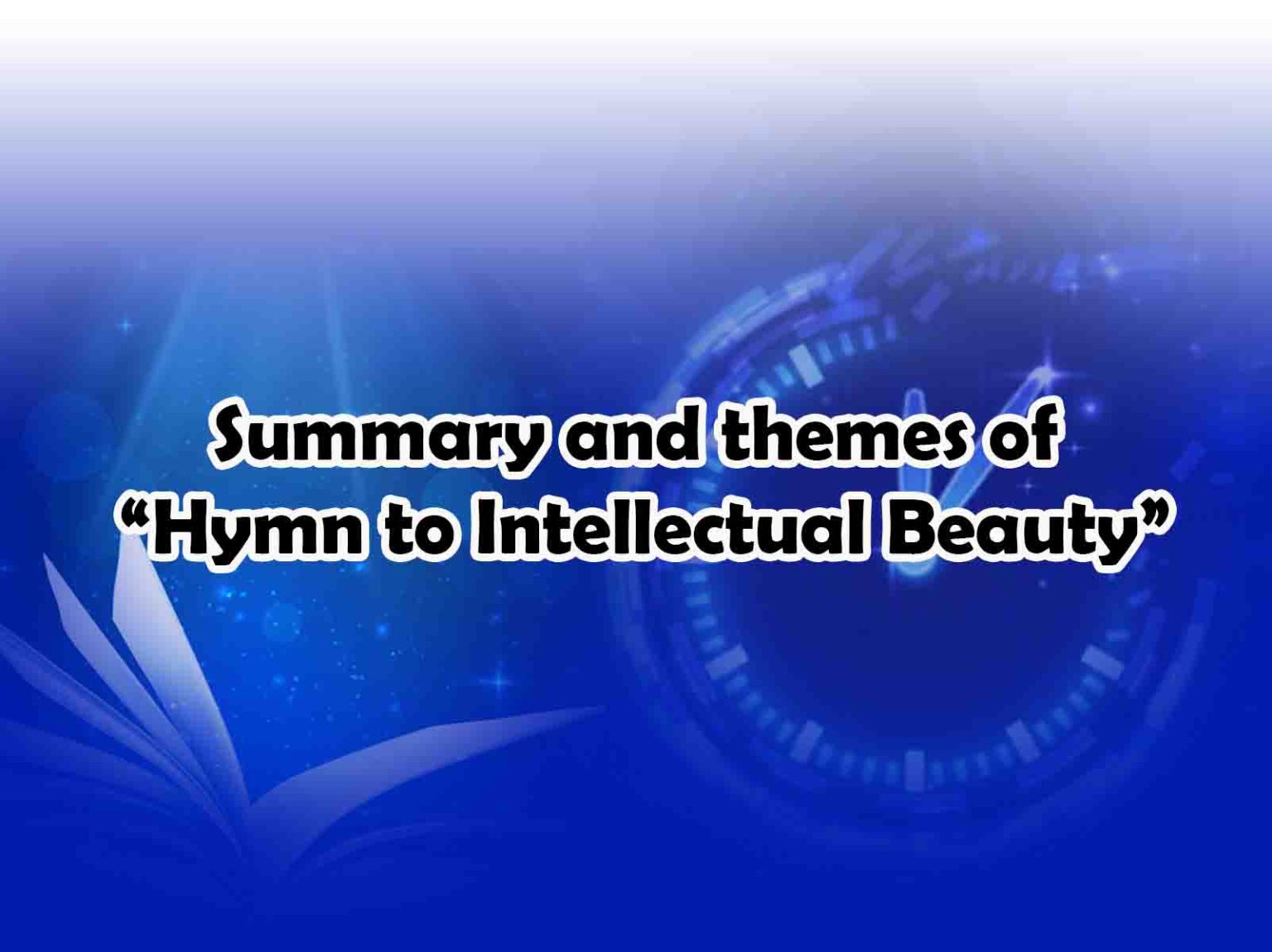 Summary and themes of “Hymn to Intellectual beauty ”

This force is unknown and invisible to man, but its shadow follows everyone. The poem is rich in literary devices and has a consistent iambic meter. Furthermore, platonic philosophy and other related philosophies can be observed if one travels through this lovely poetry.

Read more about: P.B Shelley as a Romantic Poet

Summary of Hymn to Intellectual beauty

The shadow of a weird power floats unnoticed around the globe, infiltrating man and silently appearing and going. Shelley wonders where this shadow, which he refers to as a “Spirit of Beauty,” has gone and why it fades and leaves us desolate. Then he admits that asking this question is futile; one could as well ask why rainbows evaporate or why man can love and hate, despair and hope. There has never been an answer from another universe to these questions. Men’s futile attempts to find answers to such issues are documented in the “names of Demon, Ghost, and Heaven.”

Shelley sought spiritual reality in ghosts and the dead as a child. During his search, the Spirit of Beauty’s shadow fell on him and filled him with joy. He swore to devote himself to this Spirit, and he has maintained his word. He is confident that it will liberate the globe from its current state of enslavement. He prays that this power would offer him peace since he worships it. It has taught him to dread himself while also loving all of humanity.

Themes of Hymn to Intellectual beauty

The term theme refers to an idea that recurs or penetrates a piece of art or literature. There are several topics in this poem, including:

The poem begins with a gothic element. It all begins with the mystery. The poem’s very first line, which states The terrifying shadow of some unseen Power draws the reader’s attention to the mystery.

“Hymn to Intellectual Beauty” contains the origins of Shelley’s notion of Beauty and how to achieve it. Beauty is the theme of the poem, although Shelley’s concept of how the mind works differs from Plato’s: Plato stated that Beauty is a metaphysical object that exists apart from our experiences with specific tangible objects, whereas Shelley argued that philosophy and metaphysics could not disclose truth and that comprehending Beauty was worthless. Instead, beauty could only be sensed, and its source was unknown.

The spirit of beauty in Hymn to Intellectual beauty

The poet is shown throughout the poem to be convinced of the presence of spiritual power that is distinct from the commonplace physical world and human heart. The power is invisible to man, yet it manifests itself in shadows, just as it did when the poet was a youngster, startling him.

It visits also “with inconstant glance/ Each human heart and countenance.” And when it passes away it leaves “our state, / This dim vast vale of tears, vacant and desolate.”

The poet seemed to be uninformed of the reason for the Spirit’s erratic appearance and disappearance. Because of this inclination of the Spirit, the poet begs his deity in the final verse for the power of the Spirit of Beauty to continue to offer its serenity “to one who worships thee, And every form containing thee.” Shelley intended for his definition of beauty to be abstract rather than concrete. Shelley’s style is romantic, but unlike Wordsworth, he does not bound himself to nature; rather, he removes the essence of pure beauty from nature itself.

The period in which Shelley wrote (from the mid-eighteenth century to roughly 1831) was defined by a literary reaction to the scientific and logical philosophy of the Enlightenment. Shelley’s work, like that of many Romantic poets, examines topics such as the love of nature’s simplicity, the freedom symbolised in the wild, the power of the imagination, and emotion vs rational or scientific reasoning, delighting in, rather than seeking answers to, the unknown.

Atheism is defined as a lack of belief in the presence of God. The final three stanzas of this poem perfectly encapsulate the concept of atheism. In the final three stanzas, the poet becomes a complete atheist. He recalls his childhood, when this intellectual beauty used to visit him, but he was unable to enjoy her attractions.

The poet says in the second line that it is the Spirit of Beauty that lends a sacred touch with its sparkling colours to all thoughts, things, or objects in this life of the universe. The poet is quite pessimistic about the disappearance of the Spirit of Beauty, which makes life essentially a dark valley of tears, meaningless, and lonely.

He wonders why a piece of beauty, such as a gorgeous rainbow appearing as a heavenly bridge across a mountain river, is seen so infrequently and not at all times. Why does anything glow for a brief time and then fade away forever? These, according to Shelley, are the evils of human life that cause man’s imperfection.

Supremacy of intellectual human being

Shelley goes on to say that no voice from the broader and more graceful universe has ever provided such answers to poets’ queries as Intellectual Beauty has. Even the Trinity of God, Ghost, and Heaven are records of futile attempts to explain things that failed. Their reactions, which are recorded in the Bible, whose magic remains feeble and whose strength fails to separate what is felt from what is seen.

There are still doubts, the possibility of distrust, and the possibility of change. We cannot avoid mistrust, chance, and change. Everything that has been written is subject to change. Only intellectual beauty and grace, as well as security for our troubled and cynical existence, remain on Earth. Doubts are driven before Intellectual Beauty’s shadow like mists over mountains, or music is dispersed by night wind, or moonlight is carried ahead by a running woodland stream. The spectre of intellectual beauty can only bring temporary comfort from problems and concerns. This concept is mentioned in the third stanza. This motif runs throughout the stanza.

The Romantic Movement in Literature

Summary of The Birth of Tragedy by Nietzsche