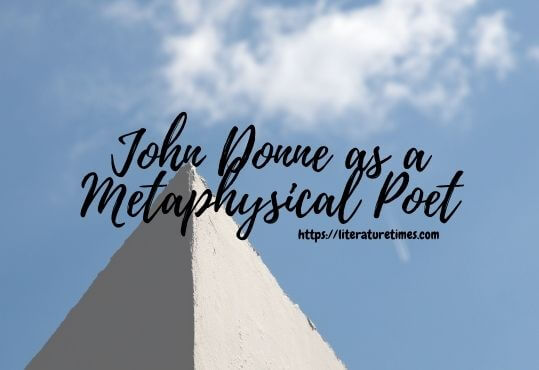 Metaphysical poetry emerged in the 17th century as a revolt against the contemporary fashion of poetry. It reacted against the Renaissance softness, smoothness, and sweet expression of Petrarchan style and took up the manner of Gongora in Spain and Marino in Italy. The word metaphysical refers to style rather than to subject matter. Metaphysical poetry is the expression of a new attitude of the mind. It wanted to convey new thoughts in a new way. It reveals a union of mind and soul, of thinking and emotions.

John Donne, the shining star of the 17th century, can indeed be called the bell ringer of “metaphysical poetry.” His poetry combines all elements of metaphysical poetry, i.e., Passion, wit, conceit, an amalgam of Passion and intellect, paradoxes, and hyperboles are characteristics of metaphysical poetry. He brings together physical and spiritual love in his poems. His images are always unique and exclusive, often drawn from classical and contemporary branches of learning.

“The metaphysical poets were men of learning, and to show their learning was their whole endeavor. If father or criticism, Aristotle has rightly called poetry an imitative art, these writers will without great wrong, lose their right of poets.”

Being a metaphysical poet, Donne has unified Passion and intellect in his poetry, known as unified sensibility. As T.S Eliot says

“One cannot think without feelings, and similarly one cannot feel without thinking.”

So, a perfect blend of feelings and thoughts is found in his poetry. In “Valediction__A Forbidding Mourning,” the poet passionately shows his deep love for his wife.

“But we by a love so much refined

That ourselves know not what it is.”

In the poem “Good Morrow,” he passionately tells us how his life was empty without love and rationally proved how it’s completed after finding love. In “Sun rising,” he seems to be drowned with passions of his love but cleverly and wittingly proves the Sun, if shine on them shine on the whole universe, for they are complete in each other,

“Shine here to us, and though art everywhere

This bed thy center is, these walls thy sphere.”

The metaphysical poetry is full of conceits, which can be defined as “a farfetched comparison between two dissimilar things” when objects of extremely heterogeneous nature are yoked together; the imagery is called conceit. Donne’s conceit mirrored his intellectualism; even in a single poem, he draws images from geography, myths, and natural sciences. Through his wit and intelligence, he discovers resemblance in apparently unlike things. In “Valediction, forbidding mourning,” the poet employs his metaphysical wit to develop a series of arguments to console his wife on the eve of his departure. We find a very rare and fantastic comparison when he relates the two lovers with two legs of a geometrical compass; even Coleridge has praised this comparison by

“Nothing was ever more admirably made than the figure of the compass.”

The wife is assigned the role of the fixed leg, which stays in the center of the circle while the other leg moves round. The circle can be completed only when the fixed leg remains firm in its place.

The essential characteristic of Donne’s metaphysical poetry is “Wit.” Donne is not merely witty but passionately witty or wittily passionate. Donne’s wit is deliberate and peculiar. It impresses us with its intellectual strength and force. It comes naturally from the author’s expansive knowledge and profound scholarship.

For instance, in “The Extasie,” Donne uses the belief of the blood containing certain spirits, which acts as an intermediary between soul and body –

“As our blood labors to get

Because such fingers need to knit

That subtle knot, which makes us

Hyperbole and exaggeration are often found in Donne’s poetry. A critic remarks:

“Every metaphor, natural or traditional, to the theme of love was elaborated in an abstract and hyperbolic fashion.”

One of Donne’s most charming and successful metaphysical love poems, “The Sun Rising,” is built around a few hyperbolic assertions. In this poem, Sun is conscious and has a watchful personality of a busy old fool.

Donne’s metaphysical poetry is embellished with witty paradoxes. In his poem “go and catch a falling star,” he argues that there is no

true and faithful woman in this world, and says

If by any slight chance the perfect woman is to be found, Donne wants to be the first to know because “such pilgrimages were sweet.” But in the following line, we observe a paradox and abrupt change of his thinking pattern when he says, “Yet do not; I would not go.” Donne explains that although a true and fair woman was to be found, he wishes to take no part in seeing her because she will have a flirt with two from the time she is found to the time it takes to write a letter or three men.

Metaphysical poetry is argumentative. The poet acts as a lawyer, choosing the fittest argument to prove his point. In “Go and catch a falling star,” he has given a series of arguments to show the absolute impossibility of the existence of a loyal woman.

“Go and catch a falling star.”

“Get with a child a mandrake root.”

“Teach me to learn mermaids singing.”

We can confidently sum up our discussion that Donne is a great metaphysical poet who brings a diverse change in English poetry. He broke chains of restrictions in diction, thought, and themes and brought freedom of expression. His metaphysical strain in poetry, far-fetched conceits, an amalgam of Passion and intellect, paradoxes, hyperbolic treatment of love makes his poems charming and exciting.