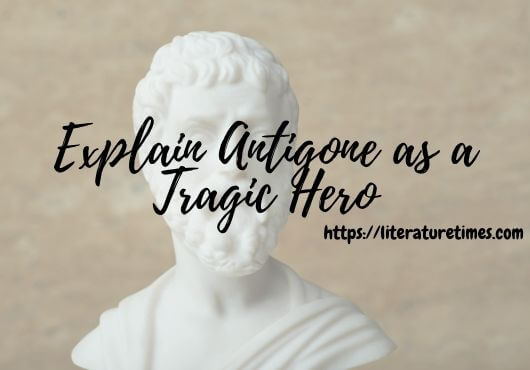 Antigone is a figure of tragedy. The protagonist in the play by Sophocles, she is the daughter of King Oedipus and Jocasta, both siblings to one another. When her brother Polyneices died (killed by their other brother Eteocles), his body was left unburied because he fought against his own city. Antigone, who loved her brother deeply, decides to bury him against the law set down by King Creon.

An overview of the Greek Tragedy Antigone

Antigone is a play by Sophocles from the fifth century BC. The story takes place in ancient Greece. Antigone, one of the main characters, is a woman who chooses to defy King Creon’s order and bury her brother’s body. In this way, she clearly exhibits courage and bravery. However, Antigone does not try to avoid the consequences of her actions; instead, she faces them squarely.

Her willingness to sacrifice everything for what she believed in made her a tragic hero.  Antigone is a tragic hero because she makes a very tragic mistake. Her mistake was choosing to follow her heart and defy her uncle, King Creon’s orders and bury her brother, Polynices, despite his death being an act of treason. Antigone is honorable and has a sense of justice that allows her to disobey the law in order to do the right thing.

Why Antigone is a tragic hero

The tragic hero is a complex character who has qualities that make him or her worthy of admiration, but also makes mistakes. Antigone is the daughter of the king and queen, Oedipus’ children. She’s brave and self-sacrificing while she’s grieving the death of her brother. But she makes one mistake when she disobeys Creon’s order to abandon her brother’s body. She believes that she has an obligation to bury her dead brother no matter what other people tell her to do.

Read About: Macbeth as a Tragic Hero

Antigone is a tragic hero because she follows her own moral compass to do what she knows is right. Antigone’s moral code may not be the same as that of the other characters in the story, but she does what is necessary for her and for her family. A tragic hero is a protagonist who falls from a high position and has a downfall. Antigone’s downfall is her death after she defied Creon’s law, which caused him to sentence her to death. Antigone is not one of the heroes of Homer but is revered by many as one of the most memorable figures in Western literature.

Antigone’s downfall starts with an unwise decision to defy Creon’s law which leads to her execution. This directly affects her family and creates tension between the two families. Antigone is a tragic hero because she makes an irrational decision that leads to her death. Sophocles presents Antigone as someone who is passionate about the things she believes in, even if they are wrong. Her unyielding beliefs blind her to the consequences of her actions and cause her own demise.

How Antigone’s personality and actions contribute to a dramatic downfall

Antigone is a tragic hero because she commits herself to a perspective, which leads to her downfall. Antigone defies the edict of King Creon not to bury her brother, Polyneices, who was killed in war with Thebes. The result of this defiance is that she spends the rest of her life in exile. Antigone’s downfall is ultimately due to his prideful attitude. Her commitment to her principles makes it difficult for her to leave something uncorrected.

The tragic flaw in Antigone’s personality is the sheer stubbornness she displays. This stubbornness leads her to a dramatic downfall. Antigone does not want to be part of the unjust monarchy that has taken power, but she wants to protect her family, especially her father. She is considered a tragic hero because even though she did something good by fulfilling her duty to bury her brother, she causes an even bigger problem. Her actions lead to her own downfall.

Antigone is a tragic hero because of her actions. She makes a foolish mistake and pays the ultimate price, but she had a lot of strength and determination. She is a heroine due to her actions and how she responds to things. The conclusion of the play is not clear because it’s left to interpretation and there are many suggestions as to what the conclusion may be. Antigone is a tragic hero because she exhibited these characteristics and because her fate was ultimately set by fate.

Explain Macbeth as a Tragic Hero

In the Penal Colony; Analysis as The Utopian Dimension

Explaining the Concept of Myth and Its Characteristics