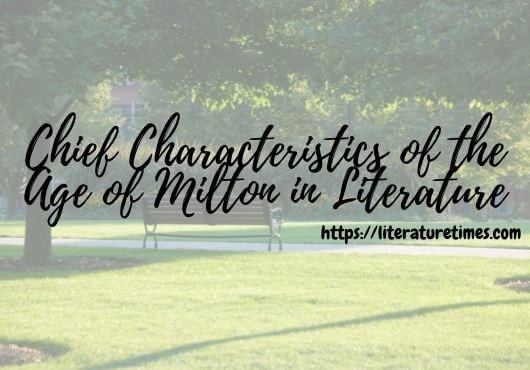 The Age of Milton

Chief Characteristics of the Age of Milton in Literature

The Age of Milton has its reference to the seventeenth century was a time of swelling Puritanism and great changes in the Church as well as the nation. It also heralded the beginning of a new era in literature with the introduction of Romantic poetry and prose. During the seventeenth century, England saw a huge change in its attitude towards the arts.

What was the literary world like in Milton’s time?

The literary world at the time of Milton was drastically different than what it is today. Writers relied on patrons to support them financially. Milton lived during the Age of Enlightenment, an intellectual movement that emphasized reason and logic as opposed to faith or tradition. This is how many scholars viewed Milton’s world as well.

He was a poet and a Christian who often wrote about morality and ethics in his work. In the seventeenth century, literature was in a renaissance. Poets from all over Europe were writing in several different languages. Although Milton’s works were eventually translated into a variety of languages, he wrote in English and Latin. He is often seen as a transitional figure between Renaissance and Enlightenment writers because he combined classical themes with more modern elements.

Writing Style in The Age of Milton

The most distinguishing characteristic of the age of Milton is its use of prose rather than poetry. This linguistic device has been used by later writers to emphasize the importance of the age, but it was not just a stylistic choice. With prose, there is more room for lengthy descriptions and speeches that help to understand the events that are taking place.

Prose also lets readers explore their own thoughts and feelings about what is happening. English poet John Milton was a polemicist, a poet who used his writing to argue for a particular cause. This style of writing is characteristic of the Age of Milton in literature.

Read About: Chief Characteristics of The Age of Dryden

In this day and age, it’s difficult to find any mainstream poetry that isn’t written by someone who has been influenced by “John Milton.”

Characteristics of The Age of Milton

The Age of Milton is a “period in literature” which is largely known for authors who are poets. The age focuses on the emergence of the English epic, the organic form of literature. It was characterized by expressive language and free-verse poetry that had many syntactic variations. Literary critics characterize it as being an era where creativity reigned supreme. Milton attended Christ’s College, Cambridge where he developed Puritan beliefs, but they weren’t so extreme that they interfered with his studies.

The Age of Milton was a time of change and revolution. The Puritan-dominated politics and the Restoration led to a new era in literature with a larger emphasis on sensibility. Milton is considered, by many scholars, as one of the most important poets of all time because he had an uncanny ability to write about God and man’s relationship with him.

Milton’s age is characterized by an increasing secularization and an intellectual and artistic reorientation that begins to show in many British writers. The British of this time were interested in cultural and artistic expressions, which they found valuable for personal development.

Differences between Shakespeare and Milton

Milton wrote prose-poems, a form of poetry that is written in a narrative style. He was a staunch believer of Puritanism and had strong views about society. Shakespeare, on the other hand, wrote primarily poems that were shorter and lighter. His works were more romantic and less concerned with religion.

Milton’s style is very different than that of Shakespeare. Shakespeare’s writing is more dramatic and immediate. Milton, on the other hand, uses elaborate language to discuss complex ideas. Milton was influenced by writers like John Bunyan, who wrote “The Pilgrim’s Progress.”

It is in these differences that we see the chief characteristics of the age in literature. Milton’s style, for instance, is much more abstract and intellectualized than Shakespeare’s. Milton often couches his thoughts in images, while Shakespeare presents his thoughts much more directly.

The chief characteristics of the age of Milton in literature are its predominance of metaphysical poets. These poets believed that nature is an expression of God and so to study and imitate it is to penetrate the divine mind and create a work which is simultaneously religious and artistic.

Who is the Hero in Paradise Lost by Milton?

The Rise of Puritanism in the Age of Milton