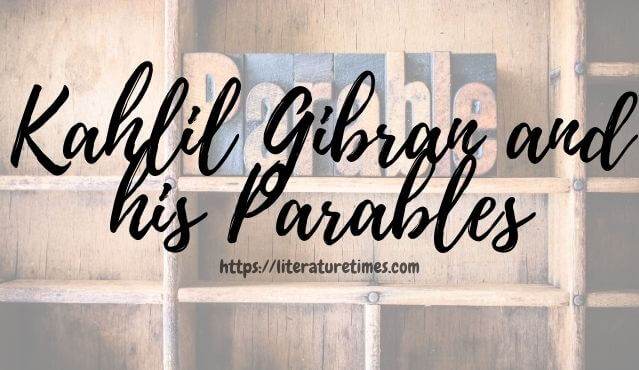 Kahlil Gibran’s parables link up with his entire work. Of course, in these three books, (Forerunner, Madman and The Wanderer) Gibran brought his parables to the clearest form, having written them expressly as parables and having given this fact a direct recognition in subtitles, this indicates his intention unequivocally. It is nonetheless a question what did Gibran comprehend under the name of parable, or rather to what extent did he modify this literary genre, employing it for his own purposes. The main sources of Gibran’s parables present no difficulty; Lebanese folklore, The Bible, Zarathustra (spiritual leader for Parsee). Of course, he didn’t shirk from inspiration by most diverse parables which he read in other literary works.

All of his writings in some way reflect his revolt against the social, the religious and the literary forms of the day. Many of these writings also depicted Gibran’s typical hero, who used eloquent speech to overcome the Lebanese feudal lords and the clergy, who were fundamentally anti-Christian.

In his second literary period, he wrote few poems but those he did reflect the same topics as his prose: the power of universal love, nature and the essential goodness of humanity. His English prose consists of moral fables, aphorisms, fragments of conversation and parables.

Gibran’s works are known for their mysticism, simplicity, imagery, metrical beauty, wisdom and lofty vision. His writings reflect his beliefs that life is a mixture of joy and suffering, that individuals are responsible for their own destiny, and that humans are social beings who must coexist.

Definition of a Parable

A parable is a fictitious narrative of events in human life or a process in nature by which a spiritual truth is illustrated or enforced.

A parable may be characterized as a narrative of simple story usually out of human life, putting forward instructions of moral laws and human moral obligations. In fact, parables are founded on allegory much as fables to which they’re in consequence rather near. Gibran’s parables comply with the vision and what specific features are displayed by Gibran’s version of this genre.

There are two characteristics to Gibran’s style. First, there is parallelism, repetition and refrain. The second characteristic is a rhyme such as that found in biblical and other sacred writings.

Gibran’s favorite themes appearing throughout his collections include: The critique of society and various social institutions which may assume a severe tone. In fact, Gibran’s critical attitude to the authority earned him an excommunication from the church and burning of his works in Beirut public market place. This of course, based on his personal experiences from Lebanon from early childhood Gibran rebelled at imposed authority. His rebellion took various forms throughout his life. Gibran progressed from direct condemnation of specific events and practices to parable of denunciation and at last in his later work to a concept of action whereby the governed maybe recognized their own power to govern.

A combination of pronouncedly critical and iconic vision of society and its institutions with a true satire of modern Americanized society with which he familiarized in earlier sojourn in USA, maybe found in Gibran’s parable “The Perfect World”, including the following words:

“I, a human chaos, a nebula of confused elements, I move amongst finished worlds – peoples of complete laws and pure order, whose thoughts are assorted, whose dreams are arranged, and whose visions are enrolled and registrated.”

Read About: Analyzing the Short Story “A Dream” by Franz Kafka

Gibran challenges the pointless literal application of rules and precepts a case in point in the “War” parable where “a thief, intending to rob a money-changer, breaks by mistake into a weaver’s shop and dashes out his eye in darkness. Subsequently, he demands a punishment of the weaver from the prince; the weaver does not demur but insists that he needs both eyes in his job. Finally, however, justice is done: a cobbles, having nothing in common with the whole affair, needs just one eye in his trade and so his other eye is put out for that of the thief”.

Criticizing society, Gibran may operate certain elements of satire bordering sometimes on absurdity. Absurdity comes to the fore in “The Blessed City”, where one of the Biblical commandments is being fulfilled in a pointless and, as a matter of fact, preventive manner. The people of this parable have but one eye and one hand each, “for it is profitable for thee that one of thy members should perish, and not that thy whole body should be cast into hell”. It seems that in texts in which any form of social critique prevails, Gibran ventures rather far from the genre of true parable.

Even common and insanity maybe taken as relative value, wise king wise people (The Wise King), sometimes a mad king and mad people… so on. Such schemes modify according to particular situations and maybe put forward for a number of parables, to name just one, a parable entitle, “The Two Learned Man”. When the reversal of value system from viewpoint of both subjects take place.

Such relativity may be masked by commonly shared opinions unified from outside but polarized inside. This leads to fundamental splits in human personalities, to “double think”. Humans expose one face to the society and reserve the other, different, for themselves, for their internal ego. Some succeed in self-identification with the social conventions, some fail in this effort. Those who do not surrender have to put on a masks before society, but when they get rid of it, they are considered as insane (the introductory parable of “The Madman”). This is what Gibran has to say on the relationship between freedom and madness: “And I have found both freedom and safety from being understood for those who understand us enslave something in us”.

In other cases, people prefer to assume a disguise, acting in a friendly way together with someone passing for a friend, though the whole matter is a lie demanded by the conventions. The parable “My Friend” quotes, “My friend, I am not what I seem. Seeming is but a garment I wear – a care-woven garment that protects me from thy questionings and thee from my negligence”.

If, of course, the convention’s grip is loosened –in sleep, for instance –true reality surfaces (“The Sleep Walkers”). A mother and a daughter give way to their aversions in sleep while behaving like two loving beings when awake.