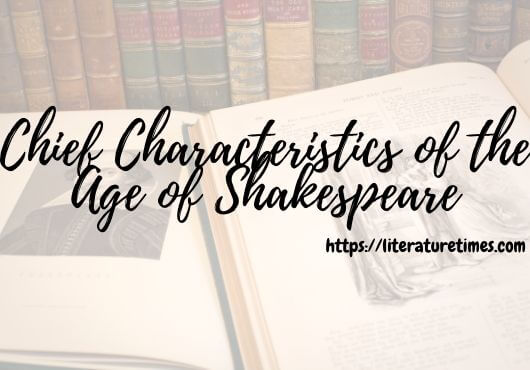 Chief Characteristics of the Age of Shakespeare

The era of Shakespeare is characterized by the importance of the theater. The theater was not only an important venue for artistic expression, but it also served as a meeting place for people to discuss politics and ideas. Yet, the era of Shakespeare was not just about theater. The era includes elements that are left out in other literary eras, such as the importance of living authorship, which is where you write based on your own life experiences.

How is the type of literature that Shakespeare wrote different from other authors?

Shakespeare wrote in the age of Elizabeth I, the Queen of England. The literature that he wrote during this time is different from other authors because it was more aristocratic and contained a lot of satire to critique the aristocracy. Shakespeare also wrote a lot about love and conflict. Compared to other authors, Shakespeare’s work is much more formal in nature.

His works are well-formed and contain many literary devices, whereas poems written by contemporaries like John Donne are much more fragmented in form. It is also important to note that Shakespeare lived during the Renaissance when education was at an all-time high. This made it possible for him to take the existing formalities of the English language and use them in his writing.

Shakespeare wrote plays because he didn’t want to be limited to one genre. He wanted to explore different topics and genres, which is something other authors were not doing. Shakespeare was a playwright and poet, and his works are still popular today. His works were often based on history, legends, and the Bible. They also dealt with common life in England in the Renaissance. He is one of the world’s greatest authors and most influential people of all time.

William Shakespeare wrote from 1590 to 1616. His work is well distinguished for its use of a popular language and the introduction of a new class of stock characters. He also wrote popular plays about Roman history, Italian Renaissance, contemporary England, and French kings. Shakespeare is undeniably the most influential writer in the English literature. His impact on English literature is so profound that it’s nearly impossible to measure his worth in thousands of words.

He was an English poet and playwright, who is often called the “Bard of Avon.” His works have many features that are still considered standard for any serious piece of literature today. Some characteristics of his era are his use of literary techniques like alliteration, imagery, and onomatopoeia. Shakespeare also used ancient classical devices like tragedy and comedy to convey his artistic messages.

The Characteristics of Shakespearean Era

The 16th and 17th century were a time of dynamic changes. Printing presses were invented, the Protestant Reformation began, and Queen Elizabeth I ascended to the throne of England. The world was changing fast, and this influenced how people thought about literature. The most prominent author in the period was William Shakespeare who loved using spoken language rather than formal language which can be found in written texts.

One of the most prominent characteristics of Shakespearean era is that it was a time when playwrights created works with very high dramatic stakes. People were dying on stage, and the audience couldn’t be sure that they would survive till the end.

The chief characteristics of the age of Shakespeare are the use of blank verse, the theme of love, and the exploration of complex human emotion. Folklore was also heavily used during this period to explore topics such as love, horror, witchcraft, and betrayal. Shakespeare is a famous and influential English playwright and poet of the Elizabethan era. The chief characteristics of this era are drama, poetry, prose, and rhetoric.

This age was the beginning of the literary era in English. Works were written in a language that was much more accessible to common people than Latin. This is the time when English literature started flourishing and established itself as one of the most important languages for cultural expression in Europe.

The English-speaking world was very different in the time of Shakespeare, and it is important to understand the qualities of this time period. Shakespeare’s plays reflect that society and their needs, as well as their fears and desires. It would be impossible to imagine any other writer, from any other time period, with such a large and wide-reaching impact.

Nora Slams the Door at the End of “A Doll’s House”. Why?

Why Philip Sidney is so Important in English Criticism?

Analysis of the Poem “Anniversary” by Daud Kamal