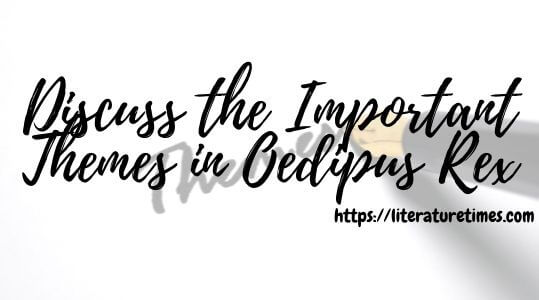 Oedipus Rex is a play written by Sophocles, in which the protagonist Oedipus is the main character. Sophocles is considered one of the three great tragedians of Classical Athens. His works were widely read and acclaimed by such literary figures as Aristotle, Goethe, and Shakespeare. The Oedipus cycle, in which this play is a part, is best known for its dramatic revelations that lead to the downfall of the king and the revelation of his incestuous relationship with his mother.

Being an ancient classical tragedy, Oedipus Rex is also rich in its themes. The themes are presented in symbolic form through the actions, setting, and theme. The main themes presented are the nature of fate and free will.

The theme of fate plays a major role throughout the Oedipus’ life. The theme of fate is often intertwined with that of chance. It was already decided in his fate that he will kill his father and marry his mother.  However, fate allowed for a chance encounter with King Laius in which Oedipus killed Laius, not knowing it was his father. Fate is something beyond the control of man and is inevitable. It is something that Oedipus cannot escape from and the audience knows that his fate to kill his father and marry his mother will come to fruition.

The audience is aware that the main character’s fate is to suffer greatly for his actions. The theme of fate can also be related to the theme of betrayal. Oedipus betrayed his father and deceived his mother, both of which were a result of fate. This fate led Oedipus to murder his father and marry his mother.

Read About: Symbolism in Oedipus Rex by Sophocles

Theme of Immortality in Oedipus Rex

In Oedipus Rex, the theme of immortality is seen in the form of the Sphinx. In the story, King Oedipus slays this Sphinx and saves his people from a curse that was placed on them by the gods. This clears a path for him to have eternal life.

The theme of immortality in Oedipus Rex is that man gets eternal life after doing great things. This is what we find in the case of Jocasta, who gives up her life for Oedipus who had saved her when she was young. Although many people died in the process of saving the kingdom, Oedipus was the only one who ascended to immortality after doing great deeds.

The theme of religion is important to Oedipus Rex because it’s the only thing he believes in. The Sphinx is a metaphor for death, so if he doesn’t find these specific answers, he will die. He knows that he has killed his father and married his mother, but in the end of the play, when he finds out that they are in fact his parents, he realizes that he is the Greek God Zeus.

Zeus, because he has killed his father’s son to take over the throne, and that is what happened in Greek mythology. The role of fate also plays here an important role in proving the theme of religion.

Freud argued that the Oedipus Complex is a universal, primal, and immutable component of all human beings. He believed that this complex is the root of neuroses and perversions, and a force against which no one can hope to defend themselves. Oedipus Rex has remarkable themes and symbolism.

I have discussed a few themes not just limited to religion, knowledge, immortality, but are also more than that. Through the play, Oedipus has presented the Greek culture to us. He not only helped in extending our knowledge of their civilization but he also showed the deep influence of Greek culture to the world.

Symbolism in Oedipus Rex by Sophocles

How Different Narrative Techniques are Used in Novels?

Nora Slams the Door at the End of “A Doll’s House”. Why?

The Warden of the Tomb as an Expressionistic play