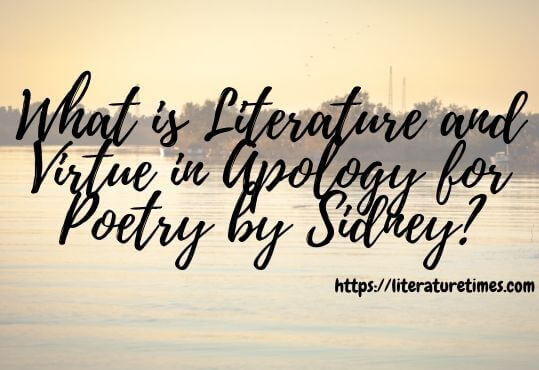 In “An Apology for Poetry,” Sir Philip Sidney attempts to reassert the primary importance of literature to society generally as well as to different creative and intellectual endeavors. Though Sidney’s work presents a synthesis of many Greek and Roman literary concepts, his argument aspires to transcend an esoteric academic debate.

Literature can “teach and delight” in a manner that different methods of communication don’t possess. The ethical/moral effect any literary text has upon a reader is of paramount significance to Sidney. Sidney’s argument and development are constructed around the assumption that literature can teach most successfully and show virtue.

Sidney places literature in a hierarchical relationship with all different types of learning; literature inhabits the very best and most influential tier. Literature is “the first light-giver to ignorance,” All other sources of information have been nurtured from it. As the primary use of language beyond the completely practical, literature stretches and expands vocabulary to accommodate broader and more conceptual questions.

Unlike Plato’s poet, who perpetuates images far, far away from the Truth, Sidney’s poet can dip into the world of Forms, the Ideal, and provide us with knowledge of virtue. While the tangible world of appearances “is brazen, the poets only deliver a golden.”

Against the established disciplines of history and philosophy, Sidney additionally uses a revision of Aristotle’s Poetics to show how literature mediates the pursuits of each type of knowledge to show virtue. Where philosophy deals solely with the common, history is consumed with the particular. Literature can cope with the very abstract ethical/moral ideas with which philosophy grapples by providing examples rooted in concrete, albeit fictionalized, particulars. History is too concerned with the accurate recording of information to make any conjectures on such broad, much less substantiated concepts. Literature exists between and above history and philosophy because the knowledge it conveys is the perfect and most valuable knowledge that exists.

Read About: What Were the Answers of Sidney on Charges on Poetry?

As Sidney states, “no learning is so good as that which teacheth and moveth to virtue, and that none can both teach and move there too so much as poetry.”

Sidney attempts to provide an entirely rational basis for his claims. He sorts literature based on its works and its parts. The works of a literary text may be seen in 4 particular moral effects, which it should seek to elicit in a reader. Sidney defines these four as the purifying of wit, enriching of memory, enabling of judgment, and enlarging of conceit.

To purify wit, literature should interact with the intellect in new and different ways. By allowing the reader to view a specific concept, character, or situation from a new or novel vantage level, literature can present a vicarious, condensed education obtainable through no other medium. Memories gathered from these fictional experiences give an ordinary frame of reference between, in any other case, disparate individuals. Fictional examples turn into touchstones that may be understood and skilled more easily by others.

Literature engages the reader actively with virtue as part of this decision-making process. To enlarge the vanity, literature expands a reader’s data and understanding of language (when it comes to style, structure, form). This, in turn, opens new modes of expression, new metaphors, to a reader. Thus, the power to create distinctive and different texts is stamped into the very nature of literature.

To focus on literature in its varied elements, Sidney develops a series of stylistic, structural, and thematic categories: pastoral, elegiac, iambic, satiric, comic, tragic, lyric, and heroic. Each sort of literature additionally attempts to elicit a particular moral response from the reader. The elements themselves are organized hierarchically as well, with the heroic being positioned at the top.

Sidney concludes his complete defense of literature by answering varied challenges to its merit and continued support. Finally, probably the most critical of those allegations, that literature is “the nurse of abuse, infecting us with pestilent desires,” Sidney is compelled to acknowledge as accurate to a greater or lesser extent.

Literature can contribute to learning virtue however doesn’t guarantee virtuous action. Because he’s aware that literature can and is abused by some, Sidney describes literature as a tool with the excellent potential for good, however, not an inherently virtuous invention in and of itself. The destructive qualities evoked by literature are products of the fallible, fragile human beings who created it rather than an indictment of the evil nature of all literature generally. Do not, as Sidney states, “say that poetry abuseth man’s wit, but that man’s wit abuseth poetry.”